Sources are saying that Ali Lee (李佳芯) will not be returning for the sequel of Big White Duel <白色強人>, and it’s upsetting a lot of people.

The Best Drama winner, which aired last summer to phenomenal success, already has a sequel in the making, and it is set to begin filming in October 2020. The medical drama starred Roger Kwok (郭富城), Kenneth Ma (馬國明), Kelly Cheung (張曦雯), and Matthew Ho (何廣沛). It is said that a majority of the original cast will be returning, in addition to the possibility of adding new members. 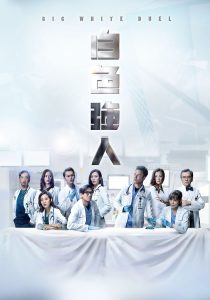 “Obviously having the original cast is preferred,” said Kenneth, who won Best Actor for his role as Dr. Tong Ming in Big White Duel. “But that would depend on the producer and writers.” Asking if the sequel would include new characters, he said, “That’s normal. When you have a new story, you’ll have new blood. You want to stay fresh for the audience.”

Natalie Tong was also reached out for comment. “I haven’t even received a notice of when we’ll start filming it,” she said. “I can’t answer this until everything gets official.” Natalie played Dr. Zoe So, a best friend of Ali’s character Dr. Kennis Cheng.

“I really hope that it’ll be the original cast,” said Kelly Cheung, who played Dr. Yan Lui. “The viewers really liked our relationship, and we also got along really well off-screen. I hope everything will go by smoothly. We want to make a great sequel for everyone.”

TVB allegedly froze Ali after she made an Instagram post that offended many mainland Chinese netizens. Ali’s screentime in the trailer for her new drama Death by Zero <殺手> only lasted a second, and rumors said TVB dropped her from appearing in the second installment of Who Wants a Baby? <BB大哂> due to the alleged controversy. Ali’s last drama was Amelia’s Rhapsody <愛美麗狂想曲>, which was completed in October 2019.