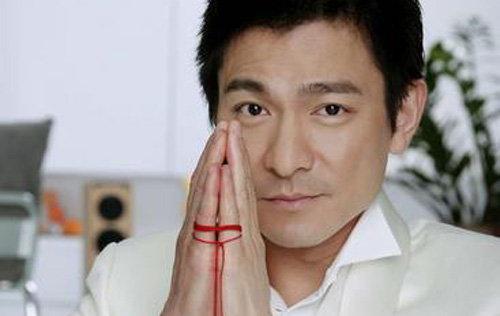 After it was revealed that Andy Lau’s (劉德華) daughter was born on May 9th, many celebrities and fans poured their well wishes to Andy and his wife, Carol Chu (朱麗倩). Fans eagerly awaited Andy to acknowledge that his daughter was born, as well as see a photo of the “Little Dragon Girl.” As the wait for Andy Lau to make a public birth announcement continued, some fans grew increasingly impatient….

Even Andy’s parents remained tight-lipped over whether they have already become grandparents. Andy’s parents maintained their morning routine of having early dim sum yesterday. When asked about the birth of their granddaughter, Andy’s parents only smiled and did not respond.

Due to Andy’s strong preference in keeping family matters out of the limelight, he has not responded to any media, friends, and fan inquiries since his daughter’s birth. Andy had once declared that he considered his fans to be his “family,” but he has not left any messages for them regarding the birth of his daughter.

Andy’s fan club members discovered that he had logged onto the online forum, but he did not post any messages. Nevertheless, Andy’s fans said good morning and sent their blessings.

Andy’s long-time friend, Eric Tsang (曾志偉), had sent a congratulatory text message, but did not get any response from the 50-year-old father. Eric said, “Andy had stopped working for a period of time already. I had guessed that his daughter will be born around this time frame.” Eric said that he did not know what Andy’s daughter looked like.

Understanding Andy’s preference for privacy, Eric said that he will not visit Andy’s home and disturb him yet. Regarding Andy handling his daughter’s birth with extreme secrecy,  Eric said that Andy always preferred to retain privacy over personal and family matters.

Since it was Andy’s first baby, he did not wish to be disturbed. It was understood that Andy may be accompanying his wife, Carol Chu, at the Hong Kong Sanatorium & Hospital in her initial postpartum recovery.

Andy Lau had wished to become a father for many years. It was rumored that Carol Chu had much difficulty conceiving until she finally became pregnant last year. Andy’s friends understood that while fatherhood came at a late age for Andy, they were extremely excited for his new paternal role.

Sammi Cheng (鄭秀文) uploaded an old photo from one of their previous films. Sammi wrote, “Congratulations! The entire world is happy for you! Ha ha!”

Carina Lau (劉嘉玲) wrote on her Weibo blog, “As you and your wife receive your daughter into the world, I wish that your baby will bring you unlimited happiness! Congratulations!”

Jayne: The world is very eager and happy to hear about Andy Lau’s daughter. We might need to be a bit patient, as it might be another week before he makes a birth announcement.