Angelababy Slowly Getting Used to Motherhood: “I’m Much Happier” 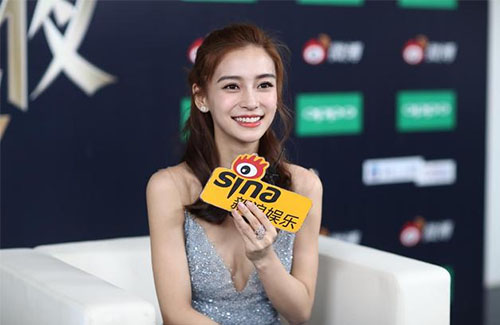 Huang Xiaoming (黄晓明) and Angelababy’s son, “Little Sponge” hit his first year milestone on January 17. It’s been a whirlwind year for Angelababy, who has not only kept up with her duties as a model and actress, but has also experienced motherhood for the first time.

The 28-year-old shared that “Little Sponge” is already learning how to call his parents. Although he learned how to say “mama” first, he couldn’t stop saying “baba” after he learned how to “unlock” that ability.

It’s been three days since Angelababy has last been with her son, and those three days felt like three years. “Because I’ve been in Shanghai filming, I got spend time with him everyday. But I’m in Beijing now, and it’s been three days without him. It’s not easy.”

Asking if she has already accustomed to motherhood, the young actress said, “I’m getting there slowly. It’s been pretty good so far. I feel that after having a child, you will naturally adapt to that identity.”

Angelababy’s mood and mindset hav also changed for the better. “I’m definitely a lot happier now. Watching a child slowly grow older each day will leave you feeling satisfied and blessed.”

For Little Sponge’s first birthday, Xiaoming and Angelababy hosted a small, private party back home. They gave Little Sponge a photo backdrop as his birthday gift, and he took photos wearing a suit and tie. Angelababy said, “Coincidentally both Xiaoming Ge and I were home, so we decided to dress a little nicer. We took a family portrait.”

Pointing out that Little Sponge looks big for his age, Angelababy said, “I can still carry him well, but I heard from [Deng Chao] today that his child already weighed 20 jin (26 lbs) at five months, while [my son] weighs about 22 jin (29 lbs) now. He’s quite average.”

This year, Angelababy will make her debut in modern-era Chinese dramas, which includes the modern epics City of Desire <欲望之城> and Entrepreneurial Age <创业时代>. Both business dramas, Angelababy was asked about the differences between her roles.

“They are both pretty different,” said Angelababy. “In Entrepreneurial Age, I play a girl who has been an achiever her entire life. In City of Desire, my character has a much more difficult life.”

Angelababy’s debut television drama is the 2015 historical period drama Love Yunge from the Desert <大汉情缘之云中歌>. Her second was General and I <孤芳不自赏>, released in 2017. Asking which setting she prefers to act in, she said, “It’s easier for me to understand my character in modern dramas. It’s harder to do that in period dramas.”

Asking if there are are any other modern roles that she wants to do, Angelababy said, “Maybe we can do something more energetic, like a female hero.”