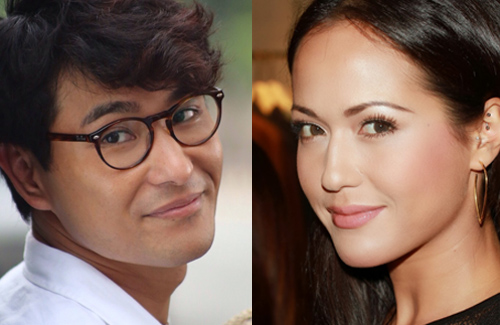 It was reported that Ruco Chan (陳展鵬) and Ankie Beilke (貝安琪) became friends immediately after collaborating in Brother’s Keeper <巨輪>. Both single at the time, neither denied the possibility of dating each other in the future. Ankie revealed that she kept close contact with Ruco since completing the drama, and Ruco has openly praised Ankie several times in front of the press, calling her beautiful, talented, and intelligent. Tabloids magazines reported that the onscreen couple were in a secret relationship in the past half year.

However, after an alleged eight months of dating, Ruco reportedly could not withstand Ankie’s “wild” partying lifestyle and ultimately called for a breakup. The breakup was evident, as their personalities were described as being polar opposites – while Ruco enjoys a healthy lifestyle of exercising and sports, Ankie rather spends her free time clubbing and socializing with friends at night.

It was said that Ankie once brought Ruco to a club to introduce him to her friends. As most of Ankie’s friends are westerners, Ruco had a hard time keeping up with their conversations.

A few days ago, Ankie was spotted bringing her good friend, Hong Kong model Rosemary, to Lan Kwai Fong, where the two were seen smoking and conversing with two western friends in front of a restaurant after dinner. Ankie was photographed hugging and kissing her friends affectionately before they parted ways. It was said that Ankie’s intimate interactions with her friends was one of the reasons why Ruco had to call off his eight-month relationship with Ankie.

Ruco Chan: “Haven’t Heard Her Name in a Long Time”

Ruco, currently busy with his filming schedule for TVB’s period drama The Apothecary <大藥坊>, briefly addressed the reporters’s concerns about his relationship with Ankie. Ruco said, “Ankie Beilke? Wow! I haven’t heard of this name in a long time!” Asked if they have been in contact recently, Ruco said, “We’re all very busy. I’m filming The Apothecary right now. She should be busy as well.”

The reporters showed a photo of Ankie kissing her male friend in Lan Kwai Fong. Looking curious, Ruco said, “Wow! Going all out!” Ruco confessed that he is not familiar with Ankie’s friends. He praised the man’s looks in the photo, saying “He looks like Keanu Reeves!”

Ruco also said that he does not see Ankie as very playful and wild like what the tabloids reported. “She’s very career-minded and she has many interests, like art, music, and painting!”

48 comments to Ankie Beilke Too Wild for Ruco Chan?