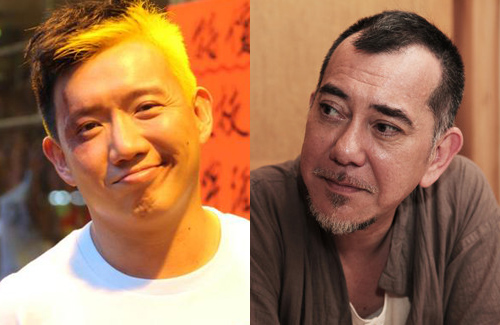 Anthony Wong (黃秋生) and Chapman To (杜汶澤) are known for their hot tempers and blunt statements. The public became aware of their long-standing hostility after their recent online exchange over Hong Kong politics. Anthony revealed that he has been tolerating Chapman for a lengthy time, “Of course, many things happened between us, which is why our relations are [so poor] now. Would I just wake up and knock my own head?”

When Chapman won the Hong Kong Film Critics Society Award for Best Actor in 2012’s Diva <DIVA華麗之後>, Anthony criticized that Chapman was undeserving of the award. At that time, Chapman chose not to comment on Anthony’s remarks.

In March, one of Hong Kong’s former newspaper editor was attacked with a cleaver in broad daylight. This sparked a rally where thousands took to the streets to protest against threats to press freedom. However, Leung Chai Yan (梁齊昕) , daughter of Hong Kong Chief Executive Leung Chu Ying (梁振英) voiced doubt over the attackers’ motives, citing that the attack has nothing to do with press freedom. This drew criticisms from netizens.

Anthony and Chapman, who are known for their outspokenness, also posted their differing opinions. When Anthony launched a personal attack at Chapman, the latter chose to remain quiet and eventually announced that he would tolerate Anthony because of they share the same manager, Mani Fok (霍汶希).

Anthony retorted, “What is he tolerating? I only have two questions. He said she [Leung Chai Yan] was ignorant, so he knows a lot? He said she is cold-blooded, so how warm-blooded is he? I am not targeting him. To anyone who says these words, I will ask these two questions.” At the same time, Anthony hinted that Chapman is a man with few friends. Anthony said, “Who is friends with him? How many friends does he have in this industry? I am the last to leave him! I used to be so good to him. Of course, he did not feel that. Who’s tolerating whom? Do you know many people used to put up with him? Go and research. I can’t speak for others.”

Anthony said bluntly that he will never work with Chapman, “I don’t even like the person; why would I film with him? We can’t even communicate. I’m a terrible person, with clear lines drawn between love and hate!” However, Anthony did not extend his dislike towards Chapman’s wife, Kristal Tin (田蕊妮), and said he does not mind collaborating with her.

Wife to the Defense

Asked to comment on Chapman and Anthony’s feud, Kristal said, “I don’t feel the need to be their mediator because only when there is an exchange of words is it considered a quarrel. My husband didn’t scold him.”

When Kristal was asked if it was indeed true that Chapman has no friends in the industry, she said, “Nothing happened to them in private. It’s really hard to understand. Anthony’s English name is Anthony Wong, buthe should change his name to ‘Anything Wrong’! Don’t have to worry about Chapman.” She added, “We have always felt that we have many friends.”

Kristal also added, “I feel Hong Kong is a society that allows freedom of speech. I believe they have their own stand. Everyone is only voicing their own opinions. But I want to say this, some things are not opposites. One does not have to be warm-hearted to say someone is cold-blooded.”

Chapman and Anthony are both artists managed by Emperor Motion Pictures. Their manager, Mani Fok, commented on their relationship, “I don’t feel caught in the middle. It’s about how people get along with each other. I deeply respect Anthony. Collaborating with Chapman for many years, he is like a little kid in my heart, and is one of my cherished artistes. I hope they can be friends and get along peacefully.”

35 comments to Anthony Wong’s Ongoing Feud with Chapman To