Despite her strong passion for acting, Kristal Tin (田蕊妮) revealed that TVB’s “factory-working mode” was a key reason she left the station in 2020. Since her departure, Kristal has been filming with her husband Chapman To (杜汶澤), with whom she shares a stormy past. This can sometimes result in heated exchanges between the couple.

In an interview with Sharon Cheung (張寶華), Kristal revealed why she had initially joined TVB and left after feeling disheartened. While hosting radio program Wa! Wa! Wa!  <嘩嘩嘩打到嚟> with Sandra Ng (吳君如) and Matt Chow (鄒凱光), Kristal felt immensely pressured due to her lack of verbal eloquence. Invited by a TVB producer to join the station, she then jumped at the chance to leave hosting and enter a new domain.

Explaining why she left after 12 years, the 43-year-old Best Actress said it was a decision she had pondered for a long time. “I really love acting. TVB has a wide platform, and gave me recognition. My motive for acting is very pure: which is to portray every character well, and to repay the viewers’ support. Due to TVB’s 24-hour production schedule and cost-cutting concerns, a relentless cycle of on-site filming, followed by filming in the studio became the default working style–even for a series which is scheduled for airing only after one or two years.”

This went against Kristal’s desire to perfect her craft. “I want to keep doing better, but in such a factory-style operation, where everyone is expected to do the same, saying that you want to do it differently ironically becomes a burden on others.”

What happened on the set of the drama Girlie Days <她她她的少女時代> eventually sealed her decision to quit. A marketing staff had suddenly issued a warning to all the actors on set to avoid mentions of “keep it up” to the press due to political sensitivities at that time. “The ‘factory’ was already limiting our acting, and now they need us to self-censor? We can’t even say ‘keep it up’? Creativity should not be like this, if this continues, I’m afraid I would turn into a machine,” Krystal surmised.

Originally planning to enrich herself through drama studies in France, Kristal’s plan was vetoed by Chapman due to the sudden pandemic, leading her to focus on filming her husband’s online program Chapman To’s Late Show <喱騷>, while preparing for stage play Murder in San José <聖荷西殺人案>.

Stormy Past with Husband 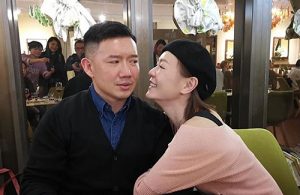 On Chapman’s inclinations for speaking up on social issues. Krystal admits this leads to “inevitable” stress for those around him as she “would feel tired also” and she would “give him lots of pressure and nag at him saying, ‘why can’t there just be peace?’”

The couple has experienced much throughout their 16 years of marriage. While many saw Kristal as the forgiving wife over Chapman’s past infidelity, she also realizes her own flaws which are also difficult to bear. She would sometimes blurt out hurtful words since “everyone selfishly thinks of him/her-self first” and shared that the “most hurtful” phrase she had uttered to him was, “You have dragged me down!”

If Chapman had said the same words to her, Kristal would have walked out on the marriage. While he responded unhappily and flared up on hearing this, thinking she did not understand him, she is certain that he has “never entertained thoughts of giving up on her.”

Love has kept Kristal’s belief in her marriage alive. “I’m thankful to Mr. To for shaping me into a better person, and would sometimes ponder, ‘Why do I continue sticking with him if I find him so unbearable? He says it’s because I know that people have strengths and weaknesses, and that it’s meaningless to focus on his flaws every day.”