Kristal Tin (田蕊妮) is already 42 years old. However, the award-winning actress continues to maintain a fit physique. Coupled with her maturity, confidence, and healthy lifestyle, Kristal emits an aura of elegance and charm. After receiving acclaim for her acting, Kristal released her new album Saturnian last year. Proud to showcase her figure, Kristal appeared nude on the album cover and received much praise from fans.

Recalling her earlier days of unhealthy choices, Kristal expressed that she once had a 30-inch waist. Most of the excess weight was evidently noticeable on her arms and belly area. Finally, she decided to lose the weight and successfully shed 11 pounds. In comparison to her 30-inch waist, Kristal now boasts a 23-inch waist. In addition to following a healthy regimen, Kristal also stays conscious about her eating habits and exercises religiously. 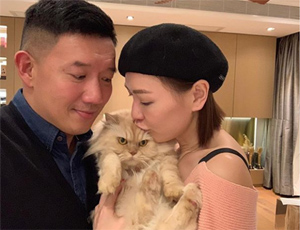 Kristal pointed to her husband Chapman To (杜汶澤) playing a vital role in her healthy lifestyle. Chapman often prepares food for his wife, which is usually high in protein. Chapman also makes sure to keep things interesting and cooks a variety of foods, including fish, chicken breast, avocado, and other vegetables.

A netizen praised, “A man who can cook is the best!” Kristal sweetly responded, “Mr. To is really going crazy when it comes to cooking. He even makes the yogurt I eat for breakfast by himself!”

Vicky Chan Starved Herself for a Month to Lose Weight