Known for his outspoken pro-democratic views, actor Anthony Wong (黃秋生) has been consistently vocal about his dissatisfaction with the Hong Kong government. As chaos continues to ensue in the city, the actor came to lose all trust and hope in the government. This may have incited his decision to leave the country for good, as he confirmed that he would be emigrating to Taiwan on social media. 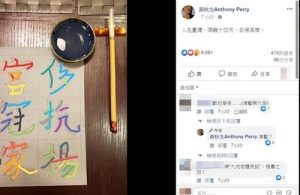 Anthony initially posted a photo of himself at the Hong Kong airport and revealed that he was going to be filming in Taiwan. The next day, he made a post again and wrote, “I’m in Taiwan right now. Under 14 days of self-quarantine. I’m enjoying myself.”

Nothing appeared unusual as Taiwanese netizens welcomed him excitedly. But Anthony made a startling revelation when a netizen joked, “Just naturalize in Taiwan!”

He admitted that his emigration plans are “in the process,” and he even went further to express that he deeply enjoys the air of freedom in Taiwan. While netizens and Taiwanese rapper Dog G (大支) sent their congratulations, his decision also sparked heated discussions online.

For someone who has been advocating for democracy throughout the years, Anthony’s move to another country has inevitably triggered unsettling feelings among Hong Kong citizens. It provoked them to reconsider their future in Hong Kong and planted doubts on whether they will ever regain their freedom and safety.

Anthony had shared his feelings on the current political situation in Hong Kong during the earlier protests. He previously said, “The future of Hong Kong depends on Hong Kong people to fight for it. I am a very proud Hong Konger, and I extremely admire the courage and bravery of young Hong Kong people.”

Despite his faith in the younger population, it appears the worsening situation in Hong Kong and his disappointment in the government forced him to have no choice but to seek refuge in Taiwan. He even encouraged Japanese people not to visit Hong Kong at the moment. “Don’t travel to Hong Kong right now because the cops are really crazy!” he said.

Anthony Wong learns to survive in a cramped prison cell controlled by AI for ViuTV’s “The Republic.”