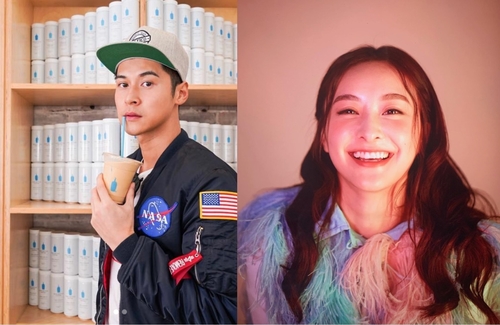 Carlos Chan (陳家樂) and Jeannie Chan (陳瀅) have been rumored to be dating for one year already! Today, it was reported that the 32-year-old Carlos and 29-year-old Jeannie met up for a romantic meal in Central before Jeannie drove them back to what looked like their love nest.

Late last year, they were caught dining together and Carlos was accused of going back to Jeannie’s apartment. However, both parties denied the dating rumors, which started swirling because Carlos and Jeannie were filming ICAC Investigators <廉政行動2019>, and they had a lot of scenes together. However, Carlos’ three-year relationship with Jennifer Yu (余香凝) just ended a few months prior, so he claimed Jeannie was just his “good brother.”

Reportedly, Jeannie is afraid her manager will find out about their relationship, so they chose not to publicize. Instead, they secretly rented out an apartment where they can spend time together.

When Carlos first joined the entertainment industry after participating in EEG’s singing contest, he was accused of being in love with Mag Lam (林欣彤). Afterward, he became involved with Jennifer, who he said he saw a future with. It was rumored that he even bought a ring. Still, the two did not last, and it was said that Jennifer dumped Carlos because she had a new beau, but Carlos was very chivalrous and defended her.

As for Jeannie, she rarely publicizes her relationships, but it is known that she once dated Arnaldo Ho (何猷亨). Aside from Carlos, she was also rumored with Joey Law (羅天宇).

1 comment to Are Carlos Chan and Jeannie Chan Cohabiting?