The TVB supernatural horror series Barrack O’Karma <金宵大廈> will be releasing its final episode on Sunday, and the storyline is quickly picking up speed. In the last two episodes, Coco (Selena Lee 李施嬅) and Yuk-fai (Joel Chan 陳山聰) plummeted into the sea – seemingly to their deaths – to escape from the clutches of triad boss Hung Gor (Ho Kai-nam 何啓南). Coco is also suffering from a bullet wound, and it is unknown if they will make it out alive. However, Lam Gor Zai (Bob Cheung 張彥博) suddenly appears and grabs Coco by the arm, but is it to save her?

Lam Gor Zai is actually the younger version of Teacher Lam (Lam Kong 劉江). It turns out that years ago, while the Twilight Mansion was being built, the builders had discovered a fox spirit, but in order to control the spirit, they had to bury a man alive. That man turned out to be Lam Gor Zai.

Joel and Selena shared that their jump to the sea was shot in the middle of the night in Sai Kung. The sea water wasn’t too salty nor too murky, and as both Joel and Selena are swimmers, the scene wasn’t their most challenging. The studio had also hired divers to explore the area beforehand to make sure that filming was safe. Nonetheless, the scene still took three nights to film. 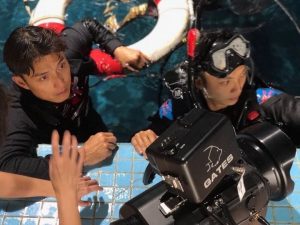 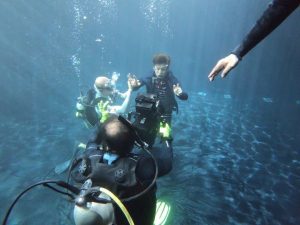