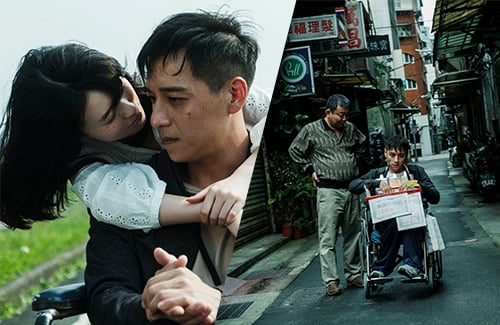 Taiwanese drama film Be Alive Just Like You <親愛的殺手> is an ambitious picture. It is, on the surface, a gritty and sensual film about the romantic life of a disabled man. But at its core, the film is about the human connection. It is about how two young people rediscover new meaning in life as they both try to overcome the burdens that had hardened them.

It stars Cheng Jen Shuo (鄭人碩) as Six, a disabled man who spends a majority of his days selling lottery tickets and relying on his father (Jason King 喜翔). Longing for romance, he is introduced to a young and lonely woman Noodle (Ally Chiu 邱偲琹) , who works at a run-down stationery shop. Noodle is burdened by her primary caregiving duties for her sick mother (Huang Tsai Yi 黃采儀), who suffers from mental illness. Her relationship with Six initially starts as friends with benefits, which later progresses to being a couple passionately in love. As they explore their raw, sexual desires for each other, they are also compounded with the cruelty of the real world.

At only 22 years old, Ally’s bold performance in the film has caught the attention of critics and talents across Asia. Her explicit yet fierce love scene with Cheng Jen Shuo may be topping headlines, but critics find that the genuine relationship between the two characters, as well as their relationship with their parents, is the key of winning the heart of the audience.

Be Alive Just Like You was selected to compete in the Young Cinema Competition for the 44th Hong Kong International Film Festival this summer.The film will also be the opening picture for the Kaohsiung Film Festival.

The movie premieres in cinemas December 4, 2020.