Benjamin Yuen (袁偉豪) is one of TVB’s most popular leading actors, so it’s hard to believe that less than ten years ago, Ben was still struggling to make it big. Ben’s net worth is now ten times more than what it was ten years ago. He’s not only invested in a fitness gym, but has also purchased a $60 million Hong Kong dollar home in Clear Water Bay with his wife Bowie Cheung (張寶兒), and tossed another HK$4 million on two permanent parking spaces. The downpayment for the home alone was at least HK$40 million, with a monthly mortgage of HK$130,000.

Last month, Ben officially tied the knot with Bowie, whom he dated for three years. “Officially we now have two people spending on one person’s income,” he joked.

Bowie Cheung is from a wealthy family. After announcing their marriage, netizens joked that Ben became “billion dollar prince consort.” Ben chuckled darkly at the joke, saying, “When I don’t read or find out about these reports, I’m a really positive guy. But after reading those comments, and just hearing all the gossiping, it does make me a little unhappy.”

When faced with unfounded and hurtful rumors, it is difficult to not be so hard yourself. Ben would try to console himself with comforting words of positivity. “A senior once told me, ‘Hey Ben, you’re not that bad. You are considered a double TV King and a leading actor after all. Why would you think that you’re not suitable for a wealthy girl? A princess?’ I guess he’s right! I’m not that bad!” 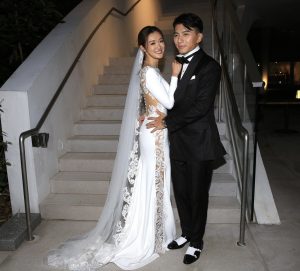 In the face of hardship and uncertainty in the air, Bowie has always been the one to bring Ben back down to earth. “I don’t care if she’s rich or someone important. That’s between the two of us,” said Ben. “Ever since going public with our relationship, we would always be in the news together. I’m not sure if that was a good or bad thing. But now that I look back, my wife is definitely my lucky charm. We immediately clicked, and she constantly reminds me to always work hard for what I do.”

Ben started off as a model in the late 90’s before appearing in a number of Hong Kong films. However, it wasn’t until the 2007 Mr. Hong Kong competition when he re-debuted in the industry as an actor. Revisiting his artiste training classmates in recent years, Ben was taken aback by the respect he’s been receiving from his former classmates and juniors, who now respectfully call him “Ben Gor.”

“They would all say, ‘good morning Ben Gor!’ Ben Gor this and Ben Gor that. Wow! I can’t believe I’ve jumped to this status already. I would say to myself, am I really a Ben Gor? Do I deserve that title? The juniors nowadays are very smart and bright. They know who they should learn from, and they are very sincere with learning. When they refer to use as ‘gor’, they’re basically telling you to look after them and bear them. I’m almost 40 now. They can call me Uncle Ben if they want. I know I’ve grown up.”