Benjamin Yuen Likes to Show Off Cooking to His Girlfriend 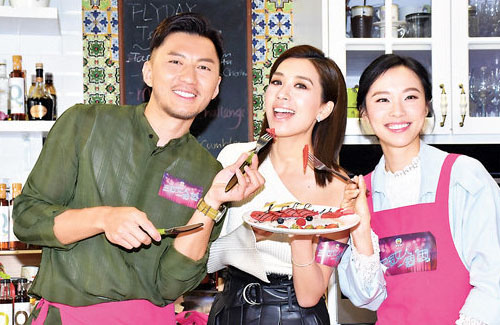 Asking if he would always cook for his girlfriend Bowie Cheung (張寶兒), Ben said, “Cooking is something that we’re both really interested in. My friends like to say I love showing off my cooking. The older you become, the less inclined you are to go out. I rather stay home and cook to manage my stress. My girlfriend is supportive about that. (Are you trying to become the perfect husband?) Don’t say it like that, I just love to learn. I got a motorcycle license for the convenience of filming dramas.”

As for the drama’s lead star Mandy, the actress said she is thrilled to hear such good responses from viewers, and is grateful for the opportunity to tackle a difficult role. Mandy doesn’t consider the show’s Sunday time slot to be a disadvantage in ratings, adding that she actually thinks it’s a good thing for dramas to air once a week, to keep up with the thrill of waiting for new episodes once every week.