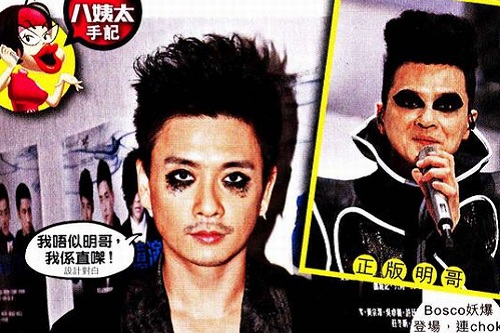 The other guest performers decided to play it safe in their fashion choices, appearing in mostly white and black ensembles. Raymond Lam wore a black suit and tie, with his hair neatly combed back. He danced and sang onstage for ten minutes. Perhaps Raymond was saving more risque costumes for his May 12th concert at The Venetian hotel and casino in Macau.

Leo Ku and Wayne Lai dueted on the theme song for TVB drama, No Regrets <義海豪情>. Due to Wayne’s 48th birthday, Leo changed the lyrics slightly to relay the birthday message, bringing a wide smile to Wayne’s face.

Ron Ng sang his classic song, Don’t Blame Her <别怪她> and was out of tune. Apparently, he did not wear a headset and did not realize that he sang off tune.

Jayne: I was quite shocked by Bosco’s eye makeup. I wonder if he did it himself?