After overcoming a large-scale tax evasion scandal, Chinese actress Fan Bingbing (范冰冰) finally emerged back in the public eye in October 2018, after disappearing for three full months. Her first comeback to the industry will be the Hollywood film 355, in which she stars alongside Jessica Chastain, Penélope Cruz, Lupita Nyong’o, and Diane Kruger. But it hasn’t been an easy return, and when a body double for Bingbing showed up on the 355 set in France, rumors are leaving us all to believe that Bingbing probably isn’t allowed to leave the country at all.

Unlike previous years, Bingbing’s 38th birthday was quiet. In the past years, numerous celebrities and friends would publicly send Bingbing their well-wishes, but this year, only Bingbing’s very own younger brother Fan Chengcheng (范丞丞), and Taiwanese actress Janine Chang (張鈞甯), publicly wished her a happy birthday. Even Bingbing’s ex-fiancé, Li Chen (李晨), said nothing. 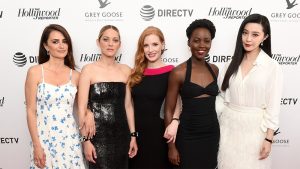 When it was announced that Bingbing will be making her great return via the Hollywood spy film 355, her future seemed bright and hopeful. Bingbing did make various public appearances and photoshoots to promote the film, leading to the belief that all could be well, but in a recent new sighting of the 355 set in France, reporters saw Chinese actress Lu Ning (鹿寧) instead. Lu Ning had green spots on her face, a technique in special effects.

According to reporters, Lu Ning had been doing work for 355 since July. Though it hasn’t been confirmed if Lu Ning is indeed a body double for Bingbing, Lu Ning’s figure and appearance does resemble Bingbing’s. Along with the CGI dots on her face, it is possible that Lu Ning’s face could be being rendered to resemble Bingbing’s.

With Bingbing’s absence in the filming thus far, it is leading to the speculation that Bingbing may not be allowed to leave the country at all.

However, there are also skeptics saying that special effects are very common in Hollywood films anyways, and that Lu Ning could just be playing a different role.