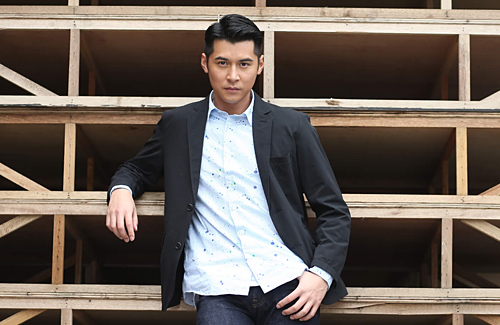 Due to TVB drama Daddy Cool <逆緣>, Carlos Chan (陳家樂) experienced a surge in popularity. Unfortunately as his career was soaring, his love life experienced a setback. He suddenly broke up with his girlfriend of four years, actress Jennifer Yu (余香凝). But the 32-year-old has put the heartbreak behind him, and turned his focus to pushing his acting career further.

“I’m not unhappy as life is not just about romance; there are many other things that can make you happy. My life now is very fulfilling; I’m living the life I have dreamed of for the past 10 years. I had hoped that my days would be full with work so even if I have no time to sleep, I still feel happy!” Carlos said.

Within the past ten years, he experienced a long period of time where he wanted to give up. There were three years where he had no work; Carlos used that time to improve himself while waiting for opportunities. “I would wait every day for someone to call me for work. I didn’t have money to go out, so I would just stay at home. Luckily, a friend taught me how to play the guitar. It was fate as afterwards I was able to get many roles due to my ability to play the guitar. But most importantly, music is something that is able to help me release negative emotions.”

Even though Carlos is 32 years old, he is still offered roles as a student due to his youthful appearance. “I feel awkward and I want to try different roles, but I can’t refuse the job either. I believe in the judgement of the director that chose me. Even if my physical appearance still fits the bill, there is a difference in the skin and soul of the eyes of a teenager and a 32-year-old man. I’m trying to tan and work out more in hopes that I can change my physical appearance and not be limited in roles.”

Viewers are able to see Carlos on screen every weekend in TVB drama ICAC 2019 <廉政行動2019>. He stars with Jeannie Chan (陳瀅) as investigators, and the pair is rumored to be dating. Both have refuted these claims and stated that they are only good friends. Carlos complimented Jeannie, “She is a very hardworking and smart girl. The drama is split between four directors and they each have their own style. She is very adaptable and able to quickly understand their instructions. Also maybe because she is from Canada, her personality is very straightforward.”

He reminisced upon a scene where they had to arrest a criminal who had jumped into the water. “The scene was about Jeannie and I jumping into the water to arrest the criminal, but in real life I don’t know how to swim well! I discussed with the martial arts director who would be acting as the criminal about how to portray this convincingly. We determined that once I fell into the water, I would use my hand to push his head underwater. However we overestimated my ability, and I ended up exerting too much force when pushing his head. I also hit Jeannie in the face with my other hand. Once we finished the scene, the martial arts director said he nearly drowned and Jeannie’s face was bruised. In the end, I looked great in the scene but all due to the sacrifices of my colleagues!”