After filming TVB’s Dressage to Win (盛裝舞步愛作戰) in 2008, Carlos Chan (陳家樂) transitioned to the film industry. Although he had appeared in Dante Lam‘s (林超賢) film To the Fore <破風>, Carlos failed to have a career-defining role and even gave viewers an impression that he is a newcomer to the entertainment industry. A decade later, the 31-year-old EEG star can be seen in the currently-airing TVB drama, Daddy Cool <逆緣>. The drama premiered to positive reception, boosting Carlos’ popularity among viewers.

In Daddy Cool, Carlos portrays the refreshing role of a man who unintentionally travels forward in time. “In the drama, I portray a man who is from the 1940s. After being frozen, I awake in the present time of 2018. Although I look like a present-day person, my demeanor and diction are that of a person from the 1940s. I had to do a lot of homework, so that the audience will believe I am someone from that era.

“At first, I was worried about overacting and not doing well. But after becoming more familiar with everyone, we would talk about the script. I am especially thankful to John Chiang (姜大偉). He is a veteran who was very willing to give me pointers. He taught me how to bring the character to life.”

Other than being grateful to John, Carlos is also apologetic for accidentally hurting John on set. Recalling the incident, he said, “Actually, the scene did not require me to hurt John. But he was very professional. He suggested that I perform an action that would enhance the scene. Unfortunately, I did not do it well and accidentally caused him to pull a muscle in his rib cage area. He had to go see a doctor. In the end, the scene came out great. John was satisfied with it and did not mind that I didn’t do the scene well.”

Starring alongside experienced actors and sharing a romantic storyline with Rosina Lam (林夏薇), Carlos would study the script every night to prepare for his scenes. He also shares several intimate scenes with Rosina. However, his girlfriend, Jennifer Yu (余香凝), did not get jealous. “At first, I didn’t think there would be any intimate scenes. After all, I am someone from the past and theoretically would not know how to date someone from the present. I was scared and nervous about my intimate scenes with Rosina because a lot of my friends adore her. She is also a beautiful woman and someone’s wife. I would study the script intently every day. Sometimes, my girlfriend would see how nervous I am and would help me rehearse the scene.” 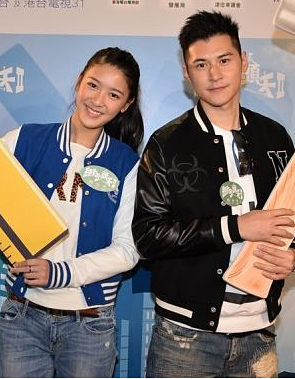 After meeting on the set of RTHK drama A Dream Comes True <總有出頭天>, Carlos and Jennifer have been in a stable relationship for three years. The couple plans to tie the knot within five years.

However, Carlos clarified, “It is not set in stone. I just feel that in five years, we are at about the right age to start a family. If we can maintain our relationship, I hope to marry her one day. This is just how I feel, so I cannot say for certain. Besides, I don’t think it represents how she feels. She told me not to rush into things because we both need to focus on our careers first. I hope we can maintain our relationship and continue down our paths together.”