Eddie Peng Travels the World for “To the Fore” 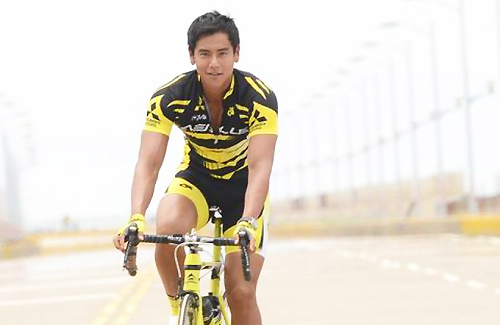 Dante Lam‘s (林超賢) film To the Fore <破風> was filmed at numerous locations around the world. An inspirational film about a team of young cyclists, the cast trotted the globe in the last two years, visiting hotspots such as the Alps in Italy and the Tengger Desert in China.

Eddie said one of his most memorable filming locations was in the Tengger Desert, located in Inner Mongolia, where he cycled for hours amidst the cold desert climate in the winter.  “It was very fun,” said Eddie. “The desert scenery is breathtaking. I’m so lucky to be able to play a cyclist who gets to have the opportunity to cycle in the desert. All the hard work is worth it! I have no regrets!”

Shawn Dou shared that he witnessed two beautiful rainbows while filming in the Alps.

Over $100 million HKD was invested for the film’s overseas shooting locations. In Kaohsiung, the production team filmed a large-scale cycling race which covered 13 kilometers. Using over 20 cameras, Kaohsiung’s magnificent scenery was also captured through helicopter work.