It’s believed viewers will get to see director Dante Lam (林超賢) and actor Eddie Peng‘s (彭于晏) fourth collaboration, The Rescue <緊急救援>, in theaters next month. The team is hoping to draw viewers with Eddie’s intense action scenes – some of which are in the air – with multiple destinations as the backdrop, including Shanghai and Mainland China. Despite Dante’s confidence and high expectations of Eddie, Dante is worried Eddie would be typecast for such action star roles.

The director shared, “He holds values where he doesn’t want his life to stop at just one particular point and desires to have diverse life experiences so that he could possess a more interesting life journey.”

Dante’s concerns show the close bond they fostered during their many collaborations. He said, “It’s clear [Eddie] has great visuals, but maybe it’s because of this aspect that it simplifies his character. He’s actually a good and sincere actor, and we also share a similar work ethic.”

Although Dante is known to have high expectations of actors and put Eddie through a challenging filming period, the actor sang Dante praises. Eddie expressed Dante has good intentions and would go above and beyond for his actors. For example, he would handle every matter personally, including shooting amongst huge waves in the ocean. Dante’s down-to-earth nature helps his actors feel secure, so it can be understood why Eddie would be willing to take such life-threatening risks for the movie. 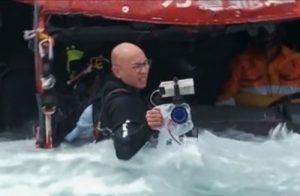