The latest action film from director Dante Lam (林超賢), The Rescue <紧急救援>, cost $90 million to produce and was one of the most expensive Chinese films ever made.  Originally slated for a January 2020 release, the film was pushed back by nearly a year to a pre-Christmas opening due to worldwide coronavirus lockdowns. In an interview with JayneStars, director Dante Lam revealed the inspiration behind the story and the risks involved in bringing a disaster film of this magnitude to screen.

The Rescue is the first film to feature the China Rescue & Salvage (CRS), a division of the Chinese Coast Guard which responds to maritime emergencies and disasters. As with many of Dante’s movies, The Rescue features jaw-dropping realism in its frenetic action sequences, but it also has more emotional depth than his previous hits Operation Mekong <湄公河行動> and Operation Red Sea <紅海行動> as it touches upon human courage and the fragility of life.  Led by Eddie Peng (彭于晏), who stars as the captain of the CRS team, the rescuers must face their own fears and put their own lives at risk each time they are on a mission to save other people.

A Film Five Years in the Making

Five years ago, Dante saw a documentary about a rescue operation in China and was inspired by the selfless sacrifices of the unsung heroes. Asked how the vision for this film has evolved over time, Dante told JayneStars, “I already found the spirit of the story, but I didn’t know how to film the technical details. I thought about it for five years. Before, the story direction tried to avoid certain technical difficulties in the production. I was more willing to take on extra risks when I [succeeded] in meeting the challenge after Operation Red Sea. I wanted to make The Rescue happen. I needed a lot of support from investors for this movie. The story was more simplistic in the beginning, but evolved to show a more human side rather than just lots of action.” 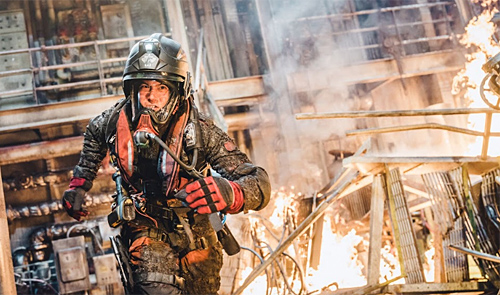 The Rescue features four major action scenes, including a gripping maritime fire explosion and plane crash. A genius at envisioning intense action sequences, Dante knows exactly what he wants to do for every scene and the film techniques involved. He demands realism in his action scenes, and pushes his cast and crew’s boundaries.  Two months before filming, the cast was required to go through rescue training, advanced swimming, and helicopter flying classes.

It would be impossible to film a movie of this scope without support from the Chinese government. “All the helicopters and ships, as well as technical assistance for filming this movie were provided by CRS so they were very helpful,” the director said.

The Rescue was filmed in Xiamen, China and Baja Studios in Mexico, where Titanic was previously filmed. There, Dante shot the large-scale aquatic and underwater scenes in the water tanks which when filled up overlooks the Pacific Ocean seamlessly. 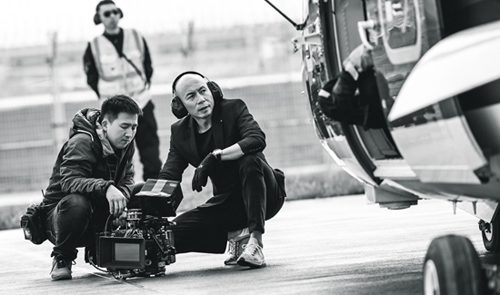 “When filming with water, it is easy to have accidents and there are a lot of safety concerns. Many foreign films, even in the west, build water sets to reduce the risks and then they add CGI. The Rescue is a realistic film about rescue missions–whatever is real, we tried to make it real so viewers can sense the real dangers of the rescue team’s work,” the director told JayneStars.

Asked what was the greatest risk he took on the set of The Rescue, Dante said the plane crash scene was the most difficult to film. The production team purchased a retired A320 airbus and shipped it from Las Vegas to Baja Studios, where it took one month to reassemble before filming took place. A gigantic crane was used to suspend the plane when it “crashed” into the sea. Dante shared, “During the actual filming, there were many production challenges. For the plane crash scene in the sea, there were 180 cast and crew members present. Any kind of accident could have happened on set because the risk was very real. It was a very big plane and the cast faced real dangers during filming. I wanted to create a sense of realism, and film the mentality and spirit of the rescuers.”

Dante has always been a director who succeeds in thrusting viewers in the midst of electrifying action scenes, but this time he also wanted to embody the spirit of rescuers, who face life or death in every mission. Dante believes, “You need utmost courage to succeed,” a mantra which also sums up the director’s film making style in which he takes enormous risks to deliver thrilling and eye-opening experiences for viewers.

The Rescue opened in theaters in China and North America on December 18, 2020.