These five male stars are truly #goals. Growing up as chubby kids, these men worked day and night to get in the perfect shape for their craft. From strict dieting to hell-like training regiments, their dedication and discipline is what makes them successful. 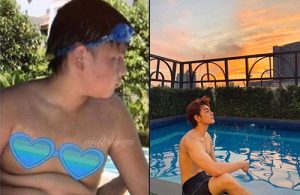 The 22-year-old shot to fame following his regular appearance on the ViuTV reality show Be a Better Man <調教你男友>, in which six young male reality stars go through a strict program to be the perfect boyfriend for their other halves. Known for his good lucks and genuine personality, Jefferey immediately shot to celebrity status, and is a hot rising star among Internet forums. Jefferey share that he used to be a fat kid, and at one point reached 190 pounds in weight. To lose all of that weight, he restricted his calories and followed the 16:8 intermittent fasting method, which is to fast for 16 hours, and eat for 8. He only ate potatoes, grapefruit, and other low caloric foods. In addition to dieting, he also worked out at the gym. He managed to lose 40 pounds in a year. 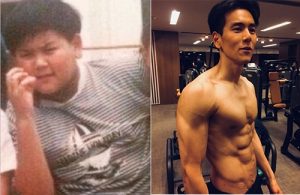 Taiwanese idol Eddie Peng is a popular actor all across Greater China. He got to show off his rock-hard abs in films like Unbeatable <激戰> and To the Fore <破風>, winning him a large female fanbase. However, Eddie used to be on the fat side when he was a kid, and he blamed it all on his love for food. In elementary school, when he was only 158 cm (5 foot 1 inch) tall, he already weighed 176 pounds. Developing a love for basketball, he ended up losing all of his weight naturally during high school, when he joined the school’s basketball team. His discipline in maintaining his weight and building muscle started while filming the Taiwanese movie Jump Ashin! <翻滾吧！阿信>, as he portrayed a gymnast. For the role, he dieted for eight straight months, got out of bed by 7 a.m., trained for 12 hours, and consumed only boiled foods. The results? A 44 inch waist and 6 percent body fat. 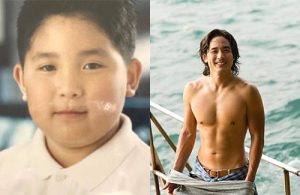 A lover for yoga, Alex was always known among the industry for having a fit body. However, he shared that he was very obese as a child. He loved fast food so much it was difficult to lose the weight. He only started dropping weight after developing a love for yoga, and now Alex is at a consistent 155 pounds. Alex doesn’t like dieting, as it puts a lot of stress in his mind and body, but he would be willing to take on the challenge if it was for a role. 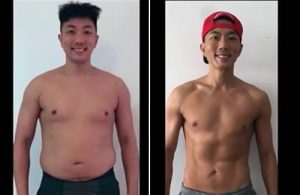 The singer trained hard for his concert, training his six pack and losing 34 pounds of fat in the process. He shared his weight loss journey on social media, even taking before and after photos. “I was not in competition with anyone else during this journey. It was my own battle. I went through many emotional ups and downs. I cried, I hated, but I was also excited that I would be able to conquer it all. Now that my solo battle is over, not only has my body changed, but also my mind. They have both become stronger. I promised myself that this will be my best gift for me.” 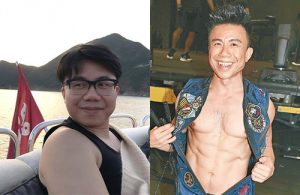 Perhaps the most famous of all weight loss journeys is this one—Hanjin Tan. The Malaysian singer-actor debuted with a bit of chubbiness in him, and many viewers actually find his chubby looks endearing. Hanjin himself had no intention of losing any weight, until he was advised by his doctor that the lipids in his body are at dangerously high levels, leading to increase likelihood of high blood pressure and heart disease. For his health, Hanjin decided to work hard to lose weight.

Sharing his weight loss journey on social media, Hanjin dropped from 180 pounds to 158 pounds in eight months. The weight isn’t as significant as the amount of fat that he has lost, and muscle mass that he has gained. He emphasized a combination of strength training and cardio training to be a good exercise balance.

“I feel very confident now,” said Hanjin. “I should change my image into a dancer-singer,” he joked.