To celebrate the conclusion of filming, Dante Lam joined lead actor Eddie Peng at an underwater dive, and the two celebrated with champagne at 30 feet underwater near where the onscreen rescue team filmed daily. Photos released of tedious behind-the-scenes preparations and the set where filming wrapped up captured the cast and crew’s hard work over 123 days of filming. 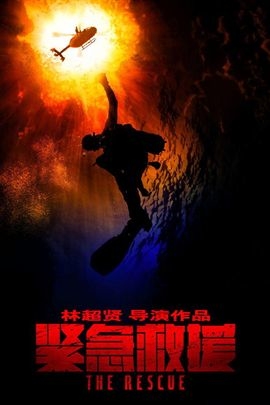 The film’s set design, described as “over the mountains and under the sea’’, is no exaggeration, as filming took place across various countries amid challenging environments, featuring not just mountainous zones, but also involved filming in open seas, underwater and in mid-air as well as explosive scenes, to fully capture the devastation of disaster zones as well as the danger of rescue operations in real life.

To prepare for their specialist roles, the cast had to undergo training prior to actual filming. Eddie, already a certified diver, underwent special training in free diving and insisted on taking part in the physical training routine with the rest of the team.

Actor Ian Wang spent more time in the gym training than sleeping so he could attain a perfect physique, while Chinese actress Xin Zhilei, who mastered all the requisite swimming and diving moves, still had to undergo six hours of daily training underwater even as filming commenced.

The rigorous training akin to military-style practice, had not only resulted in the lead cast’s ultra-fit physiques for their onscreen appearances, but also built a strong bond between members of the central “rescue team”. After each wrapped up filming, Eddie, Ian, Xin Zhilei, Wang Yutian (王雨甜), Xu Yang (徐洋), Mincheng Li (李岷城) and other actors thanked the production crew and director, expressing their unwillingness to part.

The Rescue is in its final phases of post-production, but a release date has not been announced yet.