Joey Yung (容祖兒), Denise Ho (何韻詩), and Wilfred Lau (劉浩龍) used to be the dream trio, but after Hong Kong media broke the news that Joey and  Wilfred had been secretly dating behind Denise’s back, Denise quickly cut them off. It took several years for the ice between Joey and Denise to break, but Wilfred and Denise’s old friendship appears to be permanently done for.

Last night, Joey kickstarted the first show of 18 for her Pretty Crazy Joey Yung Concert Tour at the Hong Kong Coliseum. In the days prior, the best-selling singer had released some rehearsal videos on social media to tease the fans. In one video, Joey hilariously sprayed air freshener around the dance studio to “prevent sickness” and Denise commended on the post with “Chilasin [laughing emoji],” which roughly translates to “f—king crazy.”

Though Joey liked the comment, her fans felt divided about the interaction. Some fans criticized Denise for causing trouble, and scolded her to leave Joey alone. Others argued that it appears to be a genuine, mindless interaction, pointing out that Joey did like her comment.

Joey’s ex-boyfriend and Denise’s ex-friend, however, was clear in which side he was on.

In his private Instagram account, only followed by his friends in the industry, Wilfred expressed his distaste of Denise in a new post. Using the account “_7_”, Wilfred uploaded a photo of the back of a car with a license plate that read “MY JOEY.” He said in the post, “There are a lot of bad people in this world [eye roll emoji], such as that d—kface Denise Ho [middle finger emoji].” 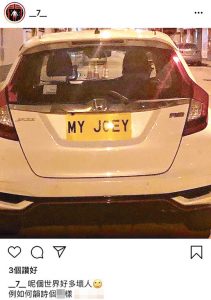