There is already drama sizzling in the Chinese variety show Sisters Who Make Waves 2 <乘風破浪的姐姐2> even though it just started airing. EEG talent manager Mani Fok (霍汶希) has already earned herself the label of “Devil Judge” for her harsh critiques. She did not even spare Hong Kong singer Joey Yung (容祖兒) from the judgment despite Joey being one of Mani’s favorite EEG artistes. 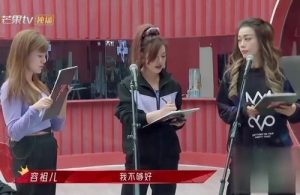 On the show, Joey is one of the captains and paired up with Taiwanese actress Michelle Chen (陳妍希) and mainland singer Alan Dawa Dolma (阿蘭) in a group. Singing and dancing to Sandy Lam’s (林憶蓮 ) “Reset” <歸零>, the trio’s rehearsal practice went horribly, leading to Mani’s rage. Mani criticized Alan Dawa for being the worst among the three and bluntly said, “Weaker people need to practice more.” 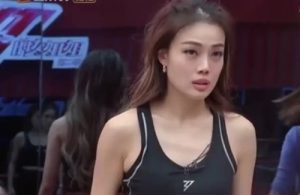 What surprised viewers the most was when Mani started yelling at Joey too. She said, “You have more experience than them, so you should be teaching them. Do you have such a low threshold for yourself?”

Alan Dawa and Michelle immediately defended Joey, but that didn’t stop Mani’s scolding. She continued, “You have to go practice after someone teaches you; that’s the only way. Alan Dawa, it is not a time to be proving yourself because you aren’t the only one doing this performance. If you don’t do well, you will drag down the entire group.” 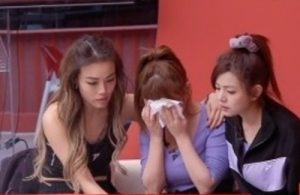 The tense atmosphere led Alan Dawa to tears, but her teammates tried to comfort her. Joey tearfully took the blame and said, “I didn’t do well. I didn’t do my part as the captain.”

Similarly, fellow Hong Kong star Cecilia had some obstacles of her own. In episode one, she ranked the fourth-lowest after she sang off-pitch to her own classic theme song “Wish Upon a Star” <星語心願> from the movie Fly Me to Polaris <星願> and danced stiffly to her song “Candy Kisses.” Although Cecilia expressed disappointment in her dancing ability, she is working to improve her skills. 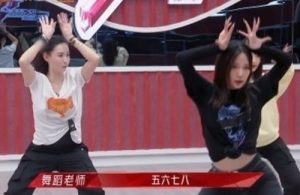 However, it’s going to take some time. In the second episode, she kept cracking up while practicing her group’s dance choreography to WayV’s “Regular” <理所當然>. She explained that she dislikes such sexy moves. She said, “I don’t like it. I hate this type of dancing the most. It is so unlike Cecilia Cheung that I want to throw up. It is so fake.”

However, to her surprise, her dancing brought a lot of comedic relief to the show. The hashtag “Cecilia’s Funny Dancing” became a popular search, and over 200 million netizens were talking about her iconic dancing within three hours.