Above: Cecilia seen with her sons, 11-year-old Quintus and 2-year-old Marcus. 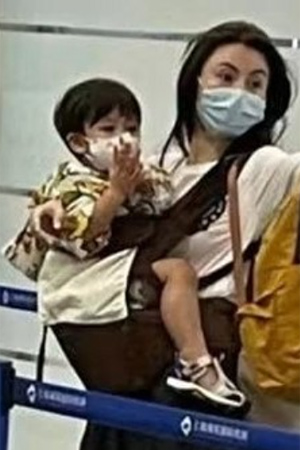 Although having a thriving career in China, Cecilia Cheung (張栢芝) took some time off to spend with her three precious sons who are off from school on summer vacation.

A netizen shared a photo of Cecilia at the Shanghai Pudong Airport. The actress’ did not care that her hair was unruly, as she was busy watching over her three sons. Her oldest son Lucas, who is almost 14, walked by himself and led the way for the family. Her 11-year-old son Quintus has grown a lot taller.

It was two-year-old Marcus that caught everyone’s attention, as he is not seen out in public often.  Although Marcus weighed over two dozen pounds, Cecilia carried him in a sling while also wearing a large backpack. The netizen remarked that Marcus has grown up a lot and is very cute with chubby legs, while pointing out his thick, dark hair. This inadvertently cleared up the old rumor that Marcus is of mixed race, as he was seen with much lighter hair when he was a baby.

As Cecilia takes her sons out often, she is frequently the subject of candid photos. Another netizen claimed to have seen the actress outside a hotel in Singapore. Wearing a black mask, she was scrolling through her cell phone seeming to be searching for something. The netizen posted the photo, and shared that Marcus and Quintus had a very good relationship.

However, other netizens pointed out that the two boys in the photo did not seem like Cecilia’s children due to their height. The smaller child was clearly taller than 2-year-old Marcus, and the taller child seems to be at most seven or eight years old, so the netizen likely was mistaken.