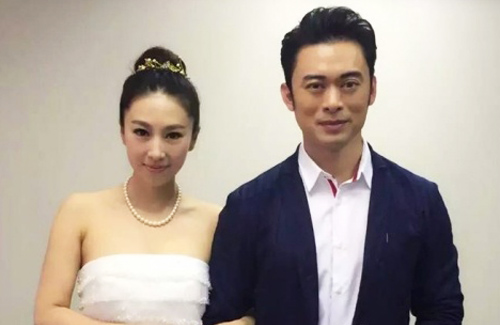 Unlike many celebrity couples who hold lavish weddings, JJ and Louis chose to keep their marriage ceremony quiet. It was a cozy affair attended by the parents of the bride and groom. JJ’s parents made a special trip to Hong Kong from Mainland China. At the ceremony, while JJ remained composed, Louis and his mother were moved to tears. The couple subsequently celebrated their wedding at a small hotel banquet, where only two round tables had been reserved. Intent on keeping the scale of the wedding small, many of JJ’s good friends within the entertainment industry, including Timmy Hung (洪天明), Jacqueline Chong (莊思敏) and Rainky Wai (蔚雨芯), were not informed about the wedding celebration. On the way to the hotel, JJ and Louis had also wrapped themselves up so as to hide their wedding outfits.

Determined to have a modest wedding, JJ even deliberately chose not to wear the three-carat diamond ring that Louis had gifted her, but instead wore a much more subdued wedding band that the couple had purchased while travelling in Turkey.

At the end of the meal, JJ was pleasantly surprised by a two-tier wedding cake that her relatives had ordered for her. This concluded the simple but joyful wedding of JJ and Louis.

In response to the news of her wedding being leaked, JJ exclaimed, “It’s not even safe within my circle of friends! I never thought of publicizing [the wedding].” ”

On whether she plans to have a baby in 2016, JJ said, “Let nature take its course! My goal right now is to focus on my work. My upcoming work is to promote my drama, The Zu Mountain Saga <蜀山>. It’s more important to develop a stable career before I start thinking about having a family.’ Louis shares similar thoughts, as he was busy with engagements even on the night before the couple’s wedding day.