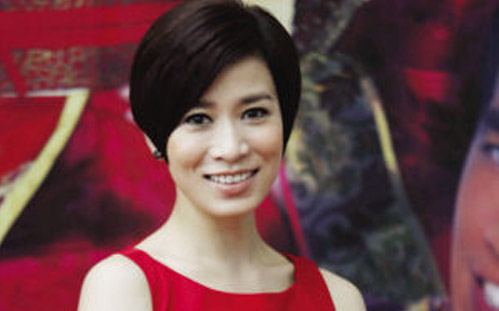 TVB Anniversary series, Can’t Buy Me Love <公主嫁到>, having taken the TV ratings of the year award last year, will be premiering in Zhejiang as of today. The series had re-used ninety-percent of its original cast from the previous popular TVB drama, Beyond the Realm of Conscience <宫心计>

The reporter also interviewed Charmaine Sheh on the spot. Charmaine Sheh who used to be TVB’s “biological daughter” and was heavily doted by them, had recently “married off” to mainland to do some filming and centralize her career there. With regards to the $15 million contract spanning two years, Charmaine Sheh’s smile blossomed but she declined to comment. When mentioned about love, ex-lover Benny Chan had already wed but Charmaine Sheh chose to focus on her career instead (upcoming project being a televised version of If You Are the One <非诚勿扰> and had plans to continue enjoying her “golden  bachelorette” status.

Because of her good interpersonal skills, Charmaine won the favor of TVB higher authorities. However, it was rumored that earlier this year, Charmaine was displeased that TVB had handled out the TV Queen award to “non biological daughter” Sheren Tang for two consecutive years and thus changed direction to venture into the Mainland market. There was even a mainland management company which offered to sign her up for $15 million Yuan for a management period of two years! Therefore, within a short span of half a year, Charmaine had already filmed a television series and a drink and makeup advertisement in mainland. It was indeed overwhelming! However, when asked about it, Charmaine Sheh smiled gently and denied that she has left TVB, “I did not leave TVB. I only changed my work arrangement with TVB to a per series basis.”

Charmaine revealed that she is currently busy filming TVB’s new drama, 4 In Love in Hong Kong with her costar, Moses Chan. Charmaine also confirmed that she has signed up with a mainland management company but when the $15 million Yuan contract fee was brought up, Charmaine swore to secrecy with a smile and said, “This must be kept a secret okay!”

About her career advancement into the Mainland industry, Charmaine expressed her excitement, “I arrived in mainland this year and realized that it was really different here as compared to Hong Kong. I feel like I have found a new direction.” Charmaine also revealed her desire to work with acclaimed film director, Zhang Yimou, “I feel that Director Zhang Yimou is a director who knows women’s heart the best.”

This September, Charmaine will also be accepting the television version of If You Are the One and will be playing the lead role of “Xiaoxiao”, which was originally played by Shu Qi (舒淇) in the movie. Charmaine added that she had already watched the original movie version and loved this role, “Initially, we had plans to film earlier this year but because the location at Japan had some problems that cropped up, other locations will probably be used instead. Definitely something worth looking forward to.” With regards to the high filming income in Mainland, Charmaine let out a satisfied smile, “Well, it is really a lot more than back in Hong Kong.”

If Only Cared About Money, Would Have Been Married Earlier

Although Can’t Buy Me Love was a comedy set in the ancient times, its English title meant that money can’t buy one’s love. In connection, nowadays, many females pick their future respective partners firstly based on their financial conditions. In reply to this, Charmaine expressed her empathy, “Everyone’s  situation is different and everyone have different requirements or needs. However, I do not believe that money is able to buy love. If that was the case, I would have been married a long time ago.”

In TVB, Charmaine Sheh has had her fair share of male rumored contenders from Julian Cheng (张智霖), Benny Chan (陈浩民), Kevin Cheng (郑嘉颖) to Ron Ng (吴卓羲) and others. Earlier on, there were even rumors that she fell in love with a Mainland property mogul who was younger than her. Charmaine smiled and professed that she was still single, “For the time being, I will be focusing entirely on my career. Wouldn’t be in a relationship for a year or so. Even so, there must be an excellent combination of timing, the right person, circumstances and background that can move me before I will accept the declaration of love.”

The only love that Charmaine ever admitted to was with ex lover Benny Chan (陈浩民) and even Benny himself had just gotten married. Charmaine expressed that she had already sent him a congratulatory text message. Charmaine who was 36 years old this year, was considered to be a “golden bachelorette left on the market.” Asked about this tagging, Charmaine laughed and said, “It is most important to be happy. Whether I’m left on the market or not, I will continue to be young at heart.”

With “Princess Zhaoyang” aka Charmaine Sheh marrying into the mainland market, “Prince” Moses Chan, who was still a TVB artist, did not bother to disguise his envy, “Ah Sheh earns much more in the Mainland as compared to us; I’m very envious!” However, Moses who had recently replaced Bowie Lam (林保怡) and was his “Number 1 TV Brother” successor, had no opportunity to break into the mainland market for a career advancement as of yet.

Early this year, Moses walked out of the shadows of his breakup with Bernice Liu (廖碧儿) and quickly fell for former Miss Hong Kong, Aimee Chan (陈茵薇). There were even rumors that the pair of lovebirds will get married in a flash. Yesterday, when asked whether wedding bells will be ringing soon, Moses Chan was thoroughly embarrassed such that his entire face was flushed red. After holding his silence for half a day, Moses finally cracked a joke and laughed, “A good matter? Our coming here to promote our new drama is a good matter!” It was known that Charmaine, who was beside the latter, impersonated the media to tease him, “Too official!”

After constant pressure and relentless questioning from the reporters, Moses finally shyly revealed that the relationship was going smoothly but did not forget to evade the issue, “When will we get married? Just leave it to fate and for God to arrange.”