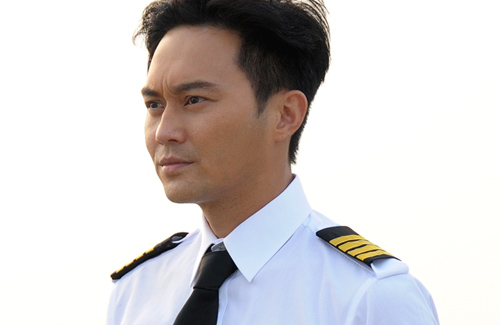 Chilam Cheung (張智霖) will be the next TV King, according to inside sources at TVB. Management executives met in a three-hour meeting to decide on the winners list earlier. Due to Triumph in the Skies 2 <衝上雲霄II> receiving the highest ratings year-to-date, TVB will go with popular opinion and give the Best Actor award to Chilam. Although he is not a TVB-managed artist, Chilam confirmed that he will film another drama with the station next year.

Kenneth Ma (馬國明) was originally a hot contender in the TV King race. Although Kenneth was voted Best Actor at the TVB Anniversary Gala last month by peers, he now stands a slim chance at the official Anniversary Awards on December 16.

With Kenneth’s obedient personality and strong work ethics, TVB considered pushing him to TV King status this year. However, The Hippocratic Crush 2’s <On Call 36小時II> ratings and feedback has been mediocre, and Kenneth failed to generate the same buzz as last year during the first installment’s broadcast.

Furthermore, Kenneth had just renewed a seven-year contract with TVB. With Kenneth locked in for the next few years, TVB does not feel the urgency to give him the award immediately.

Chilam’s Most Popular Actor win at the TVB Star Awards Malaysia 2013, which was determined by popular vote, was seen as a precursor to the outcome of the TVB Anniversary Awards.

In order to attend the TVB Anniversary Awards, Chilam declined to participate in a mainland event despite a $500,000 HKD appearance fee. Chilam’s management agent, Stephen Shiu, Jr. (蕭定一) admitted that Chilam turned down the lucrative event to accommodate the upcoming TVB Anniversary Awards.

“Cool Mort was a role that TVB gave Chilam, allowing him to have such a successful year. He should repay TVB,” said Stephen Shiu, Jr. “Although we rejected [a lucrative job], Chilam still has a lot of work to do. We’ll try our best to accommodate. We’ll have to see what TVB does?”

An insider stated, “If TVB gave Chilam the pork award, ‘The Most Popular Male Character Award,’ he would rather not get it. When the TV King is announced and it turns out that Chilam did not win, he doesn’t know what kind of expression to give the zooming cameras. He knows that winning TV king will boost his commercial value, tripling and quadrupling his fees in China. No one will complain about having too much money!”

When asked about his attendance at the Anniversary Awards, Chilam said, “I’ll see what my company arranges for me. But I’ll be happy if another artist receives the award!”

Although Brother’s Keeper <巨輪> was not an Anniversary series, it received even more positive feedback than The Hippocratic Crush 2 <On Call II> and Will Power <法外風雲>. The TV Queen title is largely in Linda Chung’s (鍾嘉欣) hands, with Kristal Tin (田蕊妮) posing little threat despite her stronger acting.

Leading dramas since her 2004 debut in Virtues of Harmony II <皆大歡喜>, Linda’s healthy image made her well loved among fans. She also won the Most Popular Actress award at the TVB Star Awards Malaysia 2013, indicating her popularity. TVB executive, Catherine Tsang (曾勵珍), openly praised Linda’s acting in Brother’s Keeper and promised to vote for Linda as TV Queen.

To increase the excitement of the Anniversary Awards ceremony, Linda allegedly suggested that she will reveal her relationship with boyfriend of six years, Philip Ng (伍允龍). Although the couple has been low-profile in their romance, Linda’s open acknowledgement of Philip as her boyfriend would put a stop to their frequent breakup rumors.

Edwin Siu (蕭正楠), who is favored by Catherine Tsang, was originally the hot favorite to win the Best Supporting Actor. However, TVB will likely give the award to Ron Ng (吴卓羲). Although Ron has slipped to supporting roles in recent years, his position at TVB appears to be on the rise again. Ron plays the lead role in new drama, The Vinegar Lady <醋娘子>, opposite Myolie Wu (胡杏兒). TVB hopes to retain the 34-year-old, whose management contract will be up next year. Also, Ron’s performance in Triumph in the Skies 2 was well-received.

Known for her solid performances in Silver Spoon, Sterling Shackles <名媛望族> and Triumph in the Skies 2, Elena Kong’s (江美儀) acting will finally be acknowledged by TVB. Elena is rumored to win the Best Supporting Actress at the Anniversary Awards.

Most Improved Actress Fight Between Priscilla Wong and Eliza Sam

Producer Sandy Yu (余詠珊) is known to heavily favor Priscilla Wong (黃翠如) and has openly campaigned for Priscilla to win the Most Improved Artist Award. However, other management executives prefer Eliza Sam (岑麗香), whose charismatic personality has won a wide following. Eliza is also well-liked by advertisers and her commercial fees are on the rise.

The Best Actor, Best Actress, and Best Drama awards will be determined by public votes and a professional judging panel. The Favorite Male Character and Favorite Female Character winners will be selected by public votes. The Best Supporting Actor, Best Supporting Actress, Most Improved Actor, Most Improved Actress, Best Hot, Best Variety Program, and Best Informative Program will be chosen by a professional judging panel and TVB artists.