The saga of Crystal Fung (馮盈盈) and Kaman Kong‘s (江嘉敏) rivalry continues after Crystal delved into the topic of two-faced friends in a recent episode of Young and Restless <後生仔傾吓偈>. When the subject matter came up on the talk show, everyone excitedly shared their experiences without naming names in case tabloids sought to dramatize their stories. As Crystal is swarmed with rumors of being on bad terms with Kaman after attending rich second-generation Arnaldo Ho‘s (何猷亨) yacht party together, everyone was most curious about her gossip but kept mum and eagerly waited for her to talk about it. 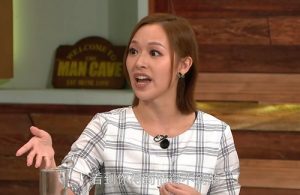 The starlet relieved their curiosity by openly sharing her views. She said, “If you ask me, I’d say I know two-faced people the best because they can act a certain way in front of you and another way when facing others. Those who always criticize others tend to have the same bad qualities. For example, if they say someone is greedy for money, that means the person is greedy for money themselves. Furthermore, if someone else has something they don’t have, then they will specifically bring it up.”

Drilling on her answer, Luk Ho Ming (陸浩明) asked, “So, if someone talks about another person wanting to be with a rich second-generation, then that means they also want to be with one as well?”

Smiling bitterly, Crystal responded, “As I said before, one who thinks that way will have that kind of quality, so that’s why they will specifically bring it up. Anyhow, I’ll let them say whatever they want because I didn’t do anything.” 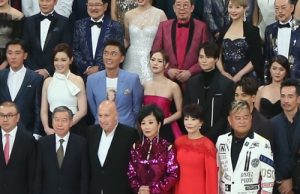 Ho Ming then followed up with another question, “What if it is the opposite case where the rich second-generation likes to befriend beauty champions and get close to you?”

The actress expressed, “If they do behave in such a manner, then I’m sure someone can notice. Naturally, there’ll be a day when they have to be responsible for their actions. But there’s no need to worry about you or them because it’s basically like stooping to their level; arguing about who’s right or wrong.”

Although Crystal strived to give a general answer, viewers still cannot help but interpret her answers as being one of the reasons why she stopped being friends with Kaman. Since it seemed like she harbors great resentment, it appears her relationship with Kaman is unlike what both had previously clarified – that their rivalry is only a baseless rumor.