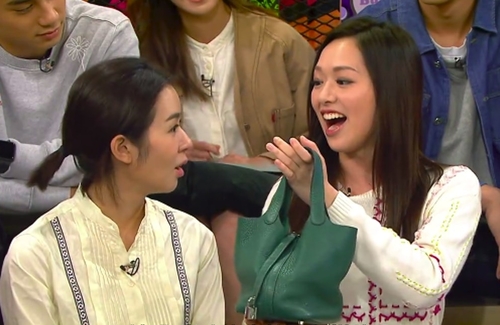 The topic of turning 18 was discussed on the latest episode of TVB variety show Young and Restless <後生仔傾吓偈>. A group of youngsters, including Crystal Fung (馮盈盈), shared how they broke free after legally becoming adults, as well as the gifts they received on their 18th birthdays. Among them, Crystal received the most generous gifts, and immediately took one of them out to show everyone.

It turns out she received a green Hermès Picotin Lock Bag, priced at 30,000 yuan, from her father when she turned 18. Although owning a Hermès bag is the dream of most girls, Crystal’s first reaction upon seeing it was not too enthusiastic. Thus, she covered it up by commenting on the bag’s “special and rare color.”

As for why Crystal’s dad gave her such a generous gift, Crystal said, “At the time, I really did not understand why the bag was so expensive, but my dad’s mentality was I should use things that are tasteful, and learn how to appreciate beautiful things after becoming a big girl.”

Louisa Mak (麥明詩), one of the hosts on the show, couldn’t help but interject and said, “He educated you in this aspect, but how come you’re like this?”

Crystal is known for appealing to middle-aged men and is dubbed as the “MK Miss Hong Kong” for her “MK” phase before joining the pageant. “MK” is short for “Mong Kok-style” and is used to describe one’s cheap and bold style – usually those with dyed blonde hair donning black clothing and tons of silver jewelry.

Even though the bag was not up her alley, she received another gift for her 18th birthday that she still treasures to this day. In a telephone interview, she disclosed her parents also got her tickets to Super Junior’s concert in Japan and even went with her.

“Actually, it was very meaningful because my little brother had a chronic disease that did not allow him to go to places with a lot of people and he had to constantly take medicine, so traveling was inconvenient for him,” Crystal expressed. “But because I was going to Japan, he became a beneficiary, and it was the first time he went to Akihabara, so he ended up buying a lot of figures. He was very happy and fell in love with Japan. But he only knows how to go to Tokyo, isn’t that terrible? It was a very happy and memorable occasion.”