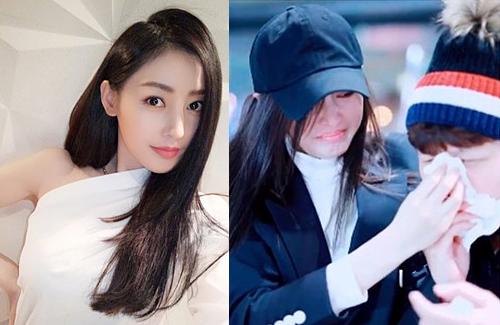 Best known for her breakthrough performance in 2015 popular web drama Go Princess Go <太子妃升職記>, Mainland Chinese actress Crystal Zhang (張天愛) was captured crying over her fan’s injury recently. Having just returned to Beijing, Crystal was met at the airport by many excited fans. As it got too crowded with fans trying to take photos, it resulted in one of them tripping over and injuring her nose.

Seeing her fan fall over, the 28-year-old actress immediately rushed to hold her and check the injury. It turns out the harsh fall had apparently shattered her glasses, causing scratches to her nose. Bleeding non-stop, Crystal got worried and asked around for tissues. She personally held the tissue down on the wound and eventually teared up at the sight of her fan being hurt. Despite, getting blood all over her hands, she did not mind and said, “It’s okay, let me do it”.

The fan initially wanted to be just treated at the airport medical center, but Crystal insisted to take her to the hospital for better treatments and a full facial check-up. Having visited two hospitals but couldn’t be seen immediately, it wasn’t until the third hospital that the wound was finally treated.

The bandaging and full-check-up took up to three hours, and Crystal had accompanied the fan the whole time. After it finished, Crystal worried about the late night, and sought to take three fans that lived far away back home, before returning to her own home to rest.

Crystal is known to be always friendly and caring towards her fans. Every time she meets fans at the airport, she would passionately talk with them like her friends and would wait for them to finish talking before leaving. Netizens who saw Crystal’s anxiety and tears largely praised “Beautiful and kind,” “Her actions looks really urgent,” and “She really saw fans as family.”