With a lapse of two years since Season 3 wrapped in 2020, fans of HBO dystopian series Westworld are finally rewarded with the release of Season Four, with the addition of Chinese-American actor Daniel Wu (吳彥祖) to the cast!

Centered around a high-tech Wild West Theme Park, the mind-bending series traversed old West (Season 1) to Japan’s Shogun World (Season 2) to World War II-era Europe (Season 3), showcasing a dystopian world that explores the relationship between robots and humans. While the first season introduced a world where humans were controlled by a high-tech supercomputer aka artificial intelligence system called Rehoboam, the trailer for Season 4 reveals Maeve’s (Thandie Newton) and Dolores’ (Evan Rachel Wood) return, as the quest for vengeance against humanity looks set to continue. 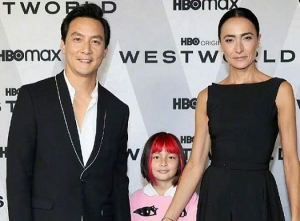 A newcomer to the sci-fi franchise, Daniel Wu makes a surprising appearance in the trailer, evoking speculation about his relationship with the leads while fans are guessing his role will be linked to that in Reminiscence, the Sci-Fi thriller which was also helmed by Lisa Joy.

Himself an advocate for Asian representation in Hollywood, Daniel and his wife Lisa S. and their daughter had appeared at the premiere, which he shared about on his social profile. The 47-year-old wrote, “It was Awesome to reunite with cast members and meet some for the first time last night! Watching the first episode of season 4 reminded me of why I love this show so much!”