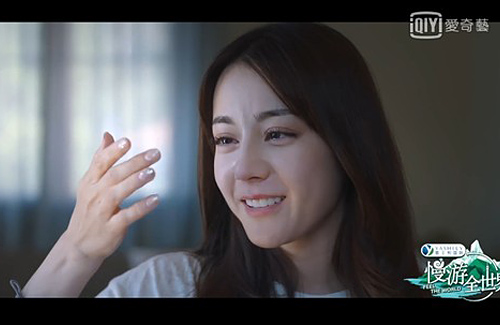 Dilireba (迪麗熱巴) recently traveled to Greece to film for variety show, The Better Life <慢遊全世界>. She participated in a home stay program and the elderly landlords reminded her of her late grandmother. As she became closer to the elderly landlady, Dilireba started to reminisce. As she started to explain, she choked up and tears began to well in her eyes as she looked out the window. When she thought about how she would not have the chance to eat her grandmother’s food anymore, Dilireba could not hold back her emotions and turned away to cry.

Dilireba grew up with her grandmother and when she entered the entertainment industry, she was inundated with work and was unable to visit often. As she explained to the camera, tears fell down her face but she told herself to stay strong, “My grandmother is very calm. When she fell ill, hundreds of villagers came to visit her but I was the only one who was unable to.”

During 2015 when she was filming for Diamond Lovers <克拉恋人>, Dilireba was notified that her grandmother was on her deathbed. Her grandmother wanted to see her one last time, but the drama crew did not allow her to take one day off as it would delay the filming process. Dilireba called her family every hour for updates, and even begged to leave filming as she could not focus at all. As soon as she was finished, she rushed home to see her grandmother but was only greeted by a pitch-black room. She broke down and cried in bed under her blankets.

When she was notified of her grandmother’s passing, Dilireba was filled with guilt. “There was hate for myself. Why did I have to be an actress? Why did I choose this job?” All her hard work was not in vain as after Diamond Lover broadcast, Dilireba became extremely famous and was able to work her way up from supporting cast to female lead.