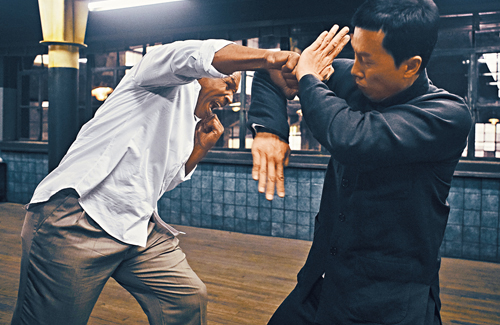 The highly-anticipated martial arts film Ip Man 3 <葉問3> will be fighting its ways to theaters this Christmas in Hong Kong. The movie, which brings back Donnie Yen (甄子丹) as the wing chun master Ip Man, continues Ip Man’s story in 1950’s Hong Kong and revolves around his meeting with Sum Nung (Zhang Jin 張晉), another wing chun practitioner.

The upcoming movie also stars the American “boxing king” Mike Tyson in his first action film. In the movie, Mike Tyson plays a property developer who is also a skilled street fighter. He will fight fist-to-fist with Donnie’s Ip Man, and fans will get the chance to see how a western fighter and a wing chun master battle it out in the boxing ring.

Mike Tyson fractured his finger when shooting their fight scene earlier this year, but Donnie himself almost got knocked out too. In a recent making-of feature released by Pegasus Motion Pictures, Donnie was seen trying to dodge Mike Tyson’s quick fists, and almost got knocked down. Donnie looked speechless afterwards. “Wow!” he said.

Donnie, a self-proclaimed fan of Mike Tyson, said, “He is the undisputed boxing king, so there’s lot of pressure having to fight him, because if you are not careful enough, he can really KO you. He’s also really fast. When he punched at me, I totally felt his fist grazed through my hair.”

Mike Tyson, who has always been a fan of the Ip Man films, said, “It’s my first time in an action film, so I’m taking [Donnie’s] lead and learning from him, listening to what he’s instructing me to do.”