Donnie Yen Prepares to Walk Down Aisle with Wife Again

By karen on February 27, 2013 in Celebrity Weddings, Hot Gossip!, NEWS 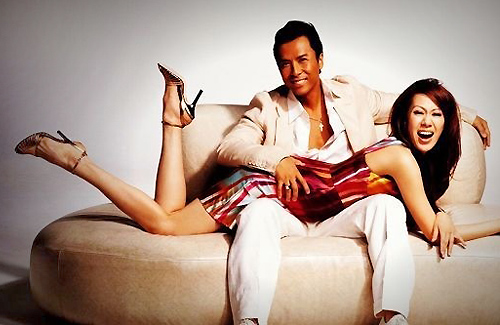 When Donnie Yen (甄子丹) married his wife, Cecilia Wang (汪詩詩), 10 years ago, the wedding was held in a rush in Toronto, Canada as Cecilia was already pregnant with their daughter, Jasmine. As a result, Donnie has promised Cecilia that for their 10th wedding anniversary this August, he wants to walk down the aisle with his wife again, in celebration of their undying love for each other.

Age indeed does not matter for true love, as proven by 49-year-old Donnie and his 31-year0old former model wife. Even though the couple has been married for nearly a decade, their love remains steadfast. According to Donnie, their wedding ceremony 10 years ago had not been perfect, and so he wants to re-create the magical moment – marriage proposal, wedding album and all.

A magical wedding will not be complete without a perfect wedding gown for the bride. As such, Donnie was spotted in Central, Hong Kong a couple of days ago with Cecilia and his sister-in-law, Wang Yuan Yuan (汪圓圓) in a Vera Wang bridal boutique. The trio spent more than 30 minutes in the boutique, with Donnie accompanying Cecilia around the shop, giving his opinions on dresses Cecilia picked. When they noticed reporters, the family smiled politely.

In a telephone interview with the Hong Kong media yesterday, Cecilia revealed that Donnie has been busy with work and since he had a day off that day, he decided to go shopping for wedding gowns with her and her sister, who is also preparing for her own wedding next year. Cecilia admitted that although she has not chosen a gown for herself, she does not rule out the possibility that Donnie may surprise her with a wedding gown as he has the tendency with such romantic gestures.

Cecilia was unable to confirm if they are going to be having a big bash in celebration of their 10th wedding but stressed that even if there is going to be a party, it will be a quiet and private event.