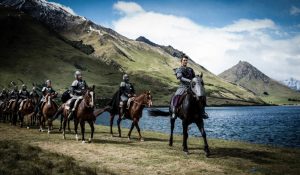 Filled with epic battles, the film opens with Liu Bei suppressing the thrilling Yellow Turban Rebellion, which was also the opening event in the literary classic Romance of the Three Kingdoms which the popular video game is based upon.

Director Roy Chow (周顯揚) said, “We have poured a lot of sweat and tears into this production and utilized many resources. We chose to film our war scenes in New Zealand where there are many mountains and forests. We hope that when everyone watches the movie, it will be like they have travelled through New Zealand as well!”

Dynasty Warriors completed filming in 2017, but required a lengthy post production period because of the large-scale battle scenes. Post production was finally completed in August 2020, but the film’s release was subsequently delayed due to the pandemic.

Dynasty Warriors was released on April 29 in Hong Kong and April 30 in China. Netflix has acquired the international streaming rights, and the movie will be available on the platform this summer.