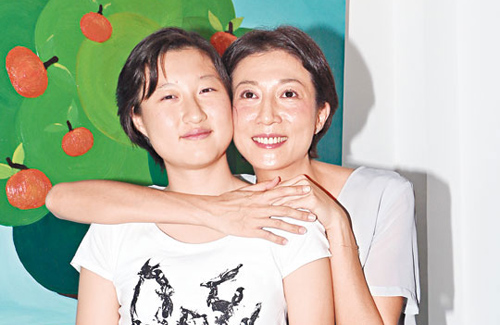 Single mother Elaine Ng (吳綺莉) appears to be headed toward reconciliation with her teenage daughter, Etta Ng (吳卓林), who is the illegitimate daughter of actor Jackie Chan (成龍). Although Elaine was accused of alleged child abuse earlier this year, the police have officially closed the case, and mother and daughter were recently spotted enjoying a late-night meal together.

In mid-March, Elaine was detained by the police after 15-year-old Etta revealed to a schoolteacher that her mother was physically abusing her. Etta also shared that Elaine was an alcoholic; not only would she frequently down two bottles of wine per night, she also had a habit of vomiting wine she had just drunk in order to consume more.

After the police discovered what they suspected to be marijuana at Elaine’s home, Etta was removed from her care for more than three weeks. She returned to her mother in April, but later that month, she refused to return home again. Elaine ended up spending Mother’s Day alone while Etta stayed at her godmother’s house.

In May, Etta participated in a week-long study abroad program in Switzerland, during which she stated that her relationship with her mother was rather good. When she returned, Elaine picked her up from the airport, and the two have continued striving to make amends.

Two nights ago, Elaine and Etta were spotted in the Happy Valley suburb of Hong Kong, where they dined at the Lotus Garden Restaurant. Both mother and daughter emerged from the restaurant with wide smiles, and Etta was seen following closely behind her mother.

Afterward, the two drove to a convenience store. While Etta remained in the car listening to music, Elaine entered the store alone in order to purchase cigarettes and beverages. Keeping true to her promise to be a better mother, Elaine refrained from purchasing any alcoholic drinks.

Elaine and Etta then returned to their home in the Tai Po district. They do not appear to have conversed during the car ride, as Etta was busy listening to music and taking a nap. Nevertheless, their relationship can be said to have taken a turn for the better.