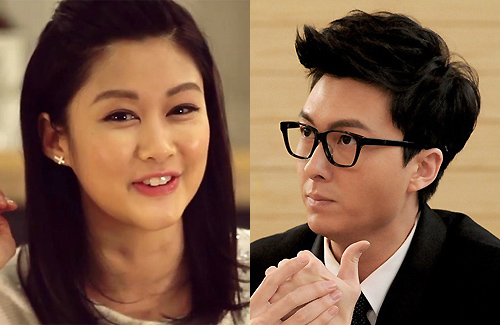 Beauty Queen Eliza Sam’s (岑麗香) popularity has been soaring since she was heavily promoted by TVB this year.  Comparatively, Vincent Wong (王浩信) may not be considered a newcomer but his stellar performance as the villain in Will Power <法外風雲> has won much critical acclaim.

With her wholesome good looks, curvaceous figure, and healthy image, Eliza is popular among viewers and advertisers. Eliza appeared in heavy roles in Sniper Standoff <神鎗狙擊> and The Hippocratic Crush 2 <On Call 36小時II>. In Triumph in the Skies 2, Eliza’s crying scene even surpassed that of leading lady, Fala Chen (陳法拉).

Already winning the Most Promising Actress award at the TVB Stars Awards Malaysia 2013, will Eliza be able to repeat her success in Hong Kong? Eliza will be facing strong competition from Priscilla Wong (黃翠如), Grace Wong (王君馨) and Oceane Zhu (朱璇). Eliza said, “I will work hard towards my goal. Whether I win the Most Improved Award, I will still put in my best. I think Priscilla will win because of her multi-talents. Not only can she act, she is also good in hosting travel programs.”

In the industry for eight years, Vincent’s career has experienced a steady increase, gaining broader recognition of his acting talent. Vincent left a memorable impression playing Damian Lau’s (劉松仁) son in Silver Spoon, Sterling Shackles <名媛望族>. This year, Vincent continued to shine in Will Power as Fala’s boyfriend who raped Sire Ma <馬賽>. Even though his character was extremely hateful, viewers were awed by his acting skill. Even competitor Him Law (羅仲謙) cast a vote for Vincent.

Vincent said, “Many people made noise online and some even questioned my own personality. But everyone gave me a lot of encouragement after the drama. This time, I put in a lot of work. With good word-of-mouth, I have confidence.”