Has actress Yoyo Chen (陳自瑤) been reportedly ousted from her lead role in upcoming drama You Are Not Her <妳不是她> due to having leaked news of her divorce with Vincent Wong (王浩信)?

With on-off divorce talk swirling since 2018 which the duo denied, both have focused efforts on their respective careers in recent years, with Yoyo finally rising in status after two decades at the station. However, media reports that Yoyo unilaterally filed for divorce four years ago elicited suspicion among TVB’s management ranks that she leaked the news herself — which riled them and caused her to be dropped from a new production and replaced by actress Crystal Fung (馮盈盈)!

Tying the knot in 2011, the couple had been sweet in public up till 2018, when rumors spread they started living apart in the same apartment, though both parties had denied this. Since talk of their relationship discord first made its rounds, TVB’s management had forbade the two celebrities from publicly commenting on the matter, for fear of jeopardizing Vincent’s “warm guy” public image and his numerous endorsement deals, since his popularity was rising at that time. Thus, both artistes would typically avoid direct replies or deny things were amiss.

Crystal Comes Out of “Sitting On Cold Bench”? 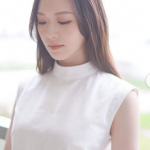 However, it was said that Yoyo insisted on applying for divorce four years ago for a clean break. According to Hong Kong’s laws, either party of a married couple who have “lived apart” for a period of two continuous years could issue a petition for divorce. When suspicions of an intentional leak landed on Yoyo – who had already finished filming Happily Ever After <婚後事> and was originally slated to start work on You Are Not Her, she was dropped and her cushy lead role was passed to actress Crystal Fung, who has not filmed dramas for months after she angered TVB management.

Asked if Crystal was to replace Yoyo in the drama, and what gave him the confidence to cast the former, TVB’s drama production head Stephen Tsui denied knowledge of Crystal being “frozen” and replied, “No, we’ve always wanted to cast Crystal…initially, we wanted to cast Yoyo, but in another role, in the end we didn’t use her as she had to film “Happily Ever After”…I wanted to give (Crystal) a chance, she actually has lots of potential…I want to give her a role that’s different from the straight-speaking kind,“

Reportedly frozen after riling TVB’s feathers for a series of missteps, Crystal was also said to have offended the station a fourth time – after TVB successfully invited famed director Wong Jing’s (王晶) to produce the Hong Kong remake of successful Taiwanese drama Light the Night <華燈初上>, she instantly turned down his arrangement for her to film in China upon learning about it.

Questioned by the press about the news surrounding his co-star in You Are Not Her, actor Karl Ting (丁子朗), meanwhile, denied knowing much and told reporters they were even faster at getting wind of things than him.