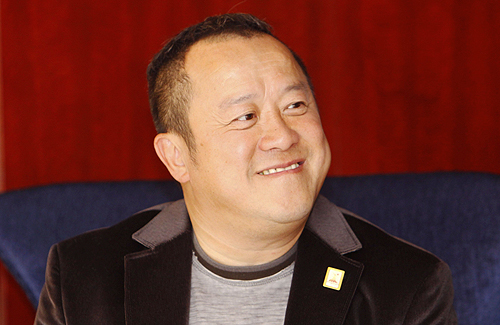 Last week, TVB fired 50 employees despite healthy financial profits. Members of the TVB Staff Association protested in black-colored clothes in front of the station’s headquarters on September 25. At an event held in Macau that same day, Eric Tsang (曾志偉) criticized the station’s staff reductions for being unreasonable.

At the promotional event were also Alan Tam (譚詠麟), Michael Miu (苗僑偉), Hacken Lee (李克勤), and Patrick Tse (謝賢). Alan heard about the staff protest against TVB’s layoffs, but is unsure of the exact situation. It was rumored that TVB lost a great deal of money after covering the 2014 World Cup in Brazil. Alan, who took part in TVB’s World Cup program, said, “We paid our air fares to Brazil. We didn’t use too much of TVB’s money!”

After realizing that Alan would hold a concert in Australia, TVB invited him to participate in a traveling program with Nat Chan (陳百祥) and Bennett Pang (彭健新), who were filming there at the same time. Alan said he did not receive any remuneration for his appearance. “[TVB] wanted to add more appeal! I definitely didn’t get paid for it! Maybe they’ll give me a TVBuddy doll, but I have plenty of those at home!”

TVB earned over $700 million HKD in profits in the first half of 2014. Alan found it incredulous that TVB still had to lay off 50 staff members. He said, “Something is going on behind the scenes!”

Eric Tsang and Michael Miu openly showed their support to the TVB staff by wearing black-colored clothes. They do not wish to see TVB to implement another round of layoffs. Eric said, “I’ve been with TVB for over 20 years. It’s like a big family to me. I feel awful. They just hired over 100 new staff earlier. Why are they firing 50 people now?”

Does Eric feel discouraged? “If you got sick, you’re fired. If you’re retiring next year, you’re fired. Why won’t [TVB] just switch them to a different department?” Eric confessed that he misses the time when TVB was under the direction of the late Sir Run Run Shaw (邵逸夫).

Rumors say that TVB’s new executive, Sandy Yu (余詠珊) had a hand in the layoffs.  Eric said, “If we all grew up with each other, then we wouldn’t have this problem. [TVB executives] never grew up with them.” Eric felt that the layoffs were not prompted by the financial state of the station. Michael Miu said TVB is being heartless.