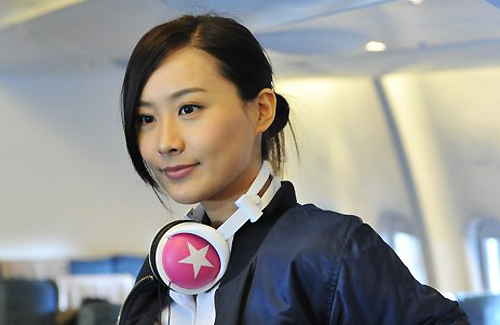 With a love for traveling, Fala Chen (陳法拉) developed an interest in aviation after shooting Triumph in the Skies 2 <衝上雲宵II> last year. A new addition to the sequel, Fala portrays Holly, a hopeful and sunny co-pilot in training.

The Triumph in the Skies 2 crew carefully scouted for locations around the world to shoot the blockbuster production. Locations include London, Paris, Hainan, and various cities in Taiwan.

“Shooting at an overseas location is very laborious,” said Fala. “Time was very tight, but Hong Kong people are very good at adapting to difficult situations. They know how to take care of themselves and deal with emergencies. We have great team spirit and we’re close. Although shooting had been laborious, the team got along happily. We saw each other every day, so we formed family bonds. Both Chilam and Francis say that I like taking care of other people – they say it’s in my blood – so they gave me a nickname, godmother.”

In the series, Fala’s “Holly” will be involved in a love triangle with Francis Ng’s (吳鎮宇) “Sam” and Chilam Cheung’s (張智霖) “Jayden.” What was it like to work with these two seniors? “They’re both very good actors. Chilam is a free spirit, so I don’t feel like I’m working with a senior at all. There was no barrier between us. I was more tense working with Francis though. Maybe it’s because of his solemn appearance, but still, Francis takes care of me very well. He would teach me the ways of acting and the principles of life.”

The Significance of Traveling

“Traveling is a very important part of my life,” admitted Fala. “Whether it was with just a backpack when I was still a student, or now when I am flying business class, the feeling I have when I travel has never changed. In my opinion, traveling is not a time to relax and enjoy life, but a time to escape my regular lifestyle and experience other lives. It allows me to let myself go and break the limits I have in my own life. We all lead very busy lives, but when we’re out on trips, I would be able to spend more time with my family, so we can learn more from each other.

“When I am traveling, I like to go to beautiful locations that are relaxing, such as mountaintops or beaches. Sometimes, I like to stay in my hotel to read a book or watch a movie. It’s true that I can easily do these things back at home, but when I am in a different location, I am able to relax myself even more. My favorite traveling destination is New Zealand. It has very unique scenery, and it gives me a feeling of absolute freedom. If I am going on trips with my family, I will choose Japan. We are all food lovers, and Japan has great food. I would plan the schedule for the family trip myself.”

Learning is a never ending process. Fala’s plans to study acting in the United States was not a sudden decision. She waited for this opportunity for years.

“It has been on my mind for many years. After my debut, I was given many opportunities to develop my career, so I had to postpone my plans to study the acting course. Coincidentally, my contract with TVB is ending, which is why I didn’t leave for the United States until now.”

Fala was not a professionally trained actress. She entered the industry as a beauty pageant contender, in which she finished the race as first runner-up in the 2005 Miss Chinese International Pageant.

“After joining the industry, acting became my number one job. I had to learn it as I go. My acting reached a bottleneck afterwards. When I was acting, I felt like I would use all of my emotional, mental, and even physical energy. I would feel nothing afterwards. When I am portraying a difficult role, my acting would turn thin and lack depth. I think now is finally the time to improve my acting through traditional means.

“I actually don’t even know what I’m lacking. I hope to be able to clear my mind and find out what is really missing when I study in the United States. I also hope to know my own personality more. I studied commerce when I was in college. Everything was about rationalization and logic. I am also a very straightforward person, and that is not a good trait for an actress. Hopefully, by the time I return, I can get rid of these flaws!”

Source: Fashion and Beauty #499 via ihktv.com