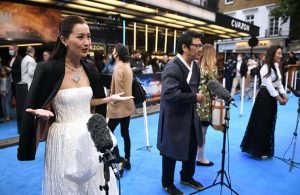 Intense Training for Action Scenes Paid Off
Chatting with the media, Fala revealed that she accepted the role even before knowing about the action scenes she had to do, “At first I didn’t receive the script yet, and only heard [about the film] from everyone, When I accepted the role, I still didn’t know what the character required, whether it required fighting scenes or if I’d have training. I only signed on and said ‘Okay, I’d take it.’ Only when I reached the set did they tell me I’d have to begin formal training. On the second day, I was already aching all over, and when Simu got close, I screamed out and told him not to touch me. We were all [close to] dying, but everything was really worth it, as we saw how beautiful the film was when it wrapped. Martial arts paired with the magic of the movie–we had really made a great action film. [I’m] eagerly looking forward to viewers appreciating the film.” 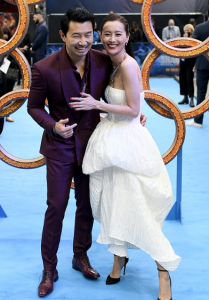 Asked about her onscreen family, such as her husband Wenwu (Tony Leung 梁朝偉), son Shang-Chi (Simu Liu) and daughter Xialing (Meng’er Zhang 張夢兒), Fala opined that Wenwu is not the antagonist, but just a “father who is very tense but harboring love, and spent a lot of time to seek answers.” Convinced that the film’s theme would strike a chord with viewers, she said, “Because no one is perfect, and no family is perfect, we’d all try our best to solve issues. These are all [evidence of] our loving emotional bond.”

Asked about the likelihood that she would appear in the next sequel like many Marvel film franchises, Fala replied that she had become close friends with the cast, in particular with Simu and Meng’er. Although she plays their mother, the three of them are around the same age and would often play pool, cook, and have fun together offscreen. “We really cared for each other and if we’ve the chance to shoot another film, our chemistry would definitely be even greater.”