With the two stars’ openly gleeful behavior, many are speculating that the breakup news might just be a publicity stunt.

Chinese actress Fan Bingbing‘s (范冰冰) alleged breakup with Li Chen (李晨) after dating for four years has led to much gossip. On June 29, Bingbing appeared for the first time at an event in a jovial mood, while Li Chen was also spotted cheerfully walking on the streets. Adding on to the fact that netizens spotted the two together in Korea just two days before the break-up announcement, many have  suspicions of the break-up as only a publicity stunt.

With so many swirling rumors, fans have given a different take on an ambiguous line in their social media breakup message, “We are still us”.

Despite Bingbing’s tax evasion scandal last year, Li Chen stayed by her side and there were rumors of wedding bells ringing for the two. Their breakup spurred more subsequent headlines: claims that Bingbing is pregnant but the father of the child is not Li Chen, and that she is in Nanjing resting at the moment.

Bingbing’s work studio quickly announced there would be legal repercussions for the false allegations. Due to the seriousness of the matter, the actress showed up in public herself to dispel the claims.

Appearing as a guest at a play reading event, the 37-year-old actress was seen first in a black dress before changing into a white outfit. Her lithe appearance and quick moves round the scene, such as helping seniors up the stage and half-kneeling on-site at photographers’ request, quickly dispelled any  pregnancy rumors. She was also all-smiles at the event, continuously waving at the audience and happily acceding to autograph requests, in a manner unlike that of someone dealing with the pain of a breakup. 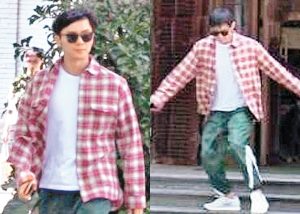 Equally happy was Li Chen,who was filmed on the streets in a checkered tee and shades, going down the stairs lightheartedly and stretching out his arms leisurely. Li Chen and Bingbing’s unexpectedly jovial behaviors led many to suspect that their breakup was merely a publicity tactic.

Bingbing was in South Korea two days before the breakup for a magazine shoot, and Li Chen had reportedly flown in to visit and sightsee at the same time. Thus, netizens were puzzled about the timing of the breakup announcement, leaving comments such as: “Their breakup is surely a tactic!”; “On the 25th they were chatting happily, on the 27th they announce their breakup online, actors are just actors,” with many certain about the fishiness of the breakup news.

Although the veracity of their breakup is still a mystery, netizens spotted a huge customized bear made out of preserved flowers which was believed to be a Valentine’s Day gift from Li Chen to Fan Bingbing, selling on a second hand platform. Then priced at 100,000 RMB, it is now selling for 38,888 RMB, with the descriptive photo showing the huge hear placed in the middle of a living room replete with cardboard boxes, as if its owner was preparing for a move.