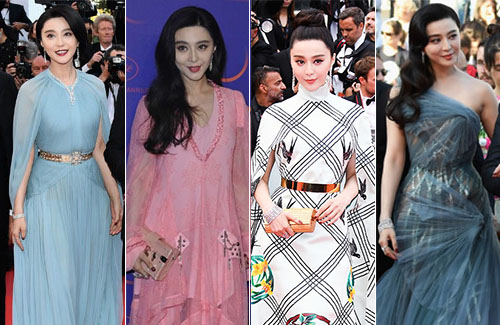 The annual Cannes Film Festival celebrated its 70th anniversary last week in Cannes, France, celebrating films of all genres from around the world. As the Queen of Cannes, Chinese actress Fan Bingbing (范冰冰) once again shined in her powerful and feminine style, landing a strong presence with her statement looks.

Check out some of her gorgeous looks below! The 35-year-old actress, also a juror at the festival, first stepped out in a white-grid dress by Ralph and Russo for the jury photocall on Tuesday, May 16. This year is Bingbing’s debut appearance as a Cannes juror since her first appearance on the Cannes red carpet in 2010.

For the jury’s dinner, the actress went for a more simpler look, with her pearl, high-neck Chloe dress. Bingbing then kicked off the festival with an light blue gown by Elie Saab Couture on the opening ceremony red carpet on Wednesday, May 17. The golden bands and capelet gave the dress a more royal look.

On Tuesday evening, May 23, Bingbing made her second red carpet appearance with a pink Louis Vuitton dress, hanging loosely on her figure. The dress is inspired by Bohemian styles. She wore tailored pieces of De Beer jewelry, which she also endorsed for her other Cannes red carpet looks that week. On May 26, Bingbing shined in a breathtaking, custom-made embroidered cape dress by Christopher Bu, the same designer who gave Bingbing her signature China-inspired look. It is the sequel to Bingbing’s famous red crane-dress back in 2011. At the closing ceremony on the night of May 28, the actress chose a silk chiffon gown from the Atelier Versace’s Spring 2017 collection for her final look. The gown hugged her body in charming ways, ending the night with a beautiful note.