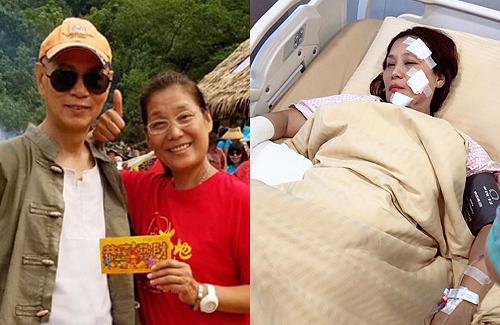 A fire broke out on the set of Lunar New Year movie, Welcome the Spring <大地回春>, and injured more than 20 artistes yesterday. Former TVB actress and action star, Sharon Yeung (楊盼盼) suffered second-degree burns on her face, while Malaysian actress, Joey Leung (梁祖儀) had minor burns on her legs. Although Law Kar Ying (羅家英) was on the filming set in Malaysia and witnessed the fire, he was not harmed.

How Did Fire Start? 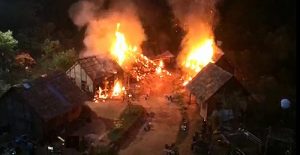 Two video clips of the fire on the filming set of Welcome the Spring was leaked online today. As the fire spread uncontrollably, screams were heard in the background and people were seen running away from the flames.

It was reported earlier that the fire started because of a technical error from a crew member. Law Kar Ying said, “The electric oil leaked on the ground. It had rained earlier, so the oil floated on top of the water and easily caught fire.”

Executive producer Jack Lim (林德榮) and Director Nick Wong (黃罕銘) were apologetic over the fire accident at a press conference held today. “The director and I will take full responsibility over this accident. We apologize to the family members of all the injured artistes.”

Sharon’s Face is Not Disfigured

Returning to Hong Kong today, Law Kar Ying said he had already visited Sharon at the hospital, “Sharon’s condition is more stable now. The burns are of course very painful. I saw that there was a lot of anti-burn ointment on her entire face.” Law added, “Sharon had second-degree burns on her face, and third-degree burns on her arm.”

Doctors said that Sharon’s burns would not disfigure her face. After the blisters heal and the new skin surfaces, Sharon’s face should heal properly, but it is not clear how long she has to stay in the hospital. The 60-year-old actress is reportedly not angry over the filming accident and not blaming anyone over her injury. She updated her Instagram today and thanked everyone for their concern.

Among the injured actors, fifteen were sent to the hospital, and a few included the elderly. One elderly man suffered burns and had a spinal shift, but did not get surgery because of his advanced age.

Actor Nat Chan (陳百祥), who also suffered burns on his hand while filming a movie in the past and was hospitalized for 40 days, expressed his outrage over the fire accident on the set of Welcome the Spring. “In this age, it’s very easy to use computer graphics to fake a fire scene. Why is it necessary to film using a real fire? Otherwise, filming these heroic action films would mean a lot of people would have to die?”

Nat said that Sharon is a strong person and wishes her a speedy recovery. He said, “She always relied on [these type of action stunts] to make a living. She relies on her strengths.”