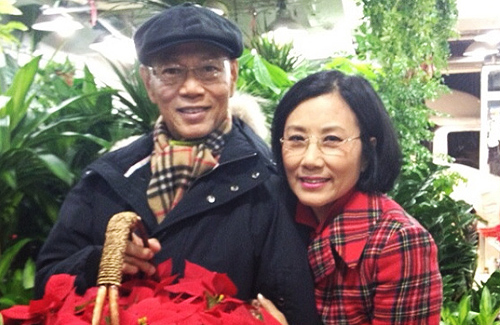 Legendary director Yim Ho (嚴浩) has recently been hosting his own health show, Yim Ho Pharmacology <食德好．嚴浩偏方>, on Hong Kong’s i-Cable Entertainment Channel. The television program, which premiered on January 6, 2013, invited various Hong Kong stars over to the show to talk about their thoughts on health, fitness, and nutrition.

Yim Ho invited good friend and longtime collaborator, Law Kar Ying (羅家英), to guest star. On the show, Law talked about his quiet battle with liver cancer and how he overcame it. Law also revealed some sweet tidbits about married life with Liza Wang (汪明荃).

Law revealed that he was diagnosed with cancer in 2004. “I was watching a ball game in the middle of the night, and I suddenly felt a sharp pain in my stomach. The pain would not go away, so after the game was over, I went to the hospital. The pain did not stop even after the doctor gave me a shot. I had no choice but to stay in overnight to get my blood tested.”

The 66-year-old actor expressed that his mind immediately went blank after he found out that he was diagnosed with liver cancer. “After a thorough examination, the doctors found out that the alpha-fetoprotein level in my blood was over 500 nanograms per milliliter. A normal person should have only about 3 to 4 ng/ml. After an NMR examination, they discovered a 3 centimeter-long malignant tumor in my liver. Fortunately, the tumor had grown at the side, and there was only one, so getting it removed was easy. I didn’t even need to go through chemotherapy.”

The days that led up to the surgery were some of Law’s most difficult times. “I was diagnosed with cancer in the middle of the month, and my surgery was at the end of the month. The days in between were some of my hardest. I couldn’t fall asleep, I cried, and I was very uncomfortable. I kept on asking myself why, why must this happen to me?”

Although those days have been quite a hard struggle for Law, he did get something good out of it. “I had terrible eating habits in the past. I was not a temperate eater. I never stop eating the things I like. There was one period in which I ate nothing but mitten crab, and I ate all ten at once. Now I eat a lot of pumpkin, tomatoes, and carrot.”

Law and Liza had been in a 20-year long term relationship before they wed in 2009. Law revealed that Liza was once diagnosed with thyroid cancer before. After their marriage, Liza discovered that she had a benign breast tumor.

“When she was diagnosed with cancer for the first time, she did not have a companion. On her second time, I was determined to be stay with her to take care of her. I want her family to support her.”

How is married life? Law laughed, “I’m not used to it! After all, I had been single for many years! Being married is a completely different experience. You are tested for your ways of communication and ways of living together.”

Law revealed that Liza made him promise to go by the three “laws” after their marriage. “She told me that she must have a lot of freedom, that I should not force her to change her customs, and that she would not be controlling as long as I am not controlling of her.”

Law expressed that he is content with his life, and happy in his married life with Liza. “However, my only regret is that I am childless.”