TVB starts retrenching staff in a “restructuring move” with producers, scriptwriters and other production crew bearing the brunt.

On December 21, TVB CEO Mark Lee (李宝安) issued an internal statement to staff which informed that 10 percent of non-artiste employees will be retrenched, affecting about 350 people.

While TVB did not reveal the total figures and departments the retrenched workers belonged to, Mark Lee summarized in the statement, “The ongoing Hong Kong protests have badly affected the economy. As the forecast is less than ideal and matters show no signs of abating, we cannot predict when stability will resume and the economy will recover, thus the company has announced restructuring. In order to keep operations sustainable, among 3500 non-artiste employees, about 10 percent will be affected, who will receive legal compensation including payment in lieu of notice and gratuity handouts.”

Variety and Infotainment Department Most Affected

According to news, Assistant General Manager (non-drama) Sandy Yu’s (余詠珊) variety and infotainment department is the most critically affected with over 50  members laid off, which included producers as well as the director, scriptwriter, editors, assistant directors and research writers of the entertainment news program Scoop <东张西望>. Leung Kim Hang (梁儉恆), producer of Bazaar Carnivals <街市游乐团> and The Green Room<今日VIP>, as well as Edgar Wong (黃中濠) were also not spared.

The producer of Big City Shop <流行都市>, Chiu Lai Ping (赵丽平), who had previously retired and then had his contract renewed, was also affected by the layoff. Among others retrenched include Big Boys Club <兄弟帮> producer Kent Gor (谢英伟).

There was talk that Sandy Yu had targeted those who worked at the station for many years, but spared her ex-colleagues from Asia Television. 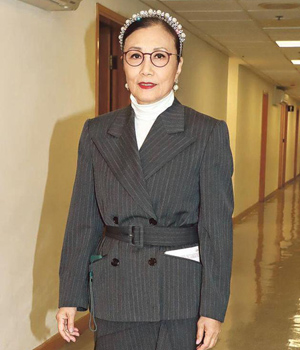 Liza Wang (汪明荃), who was present at a performance starring her husband Law Kar Ying (罗家英), said she did not hear any rumors about Charles Chan (陈国强) stepping down as the CEO of TVB. “It’s only rumors, but to manage a company you need to consider many factors, calculate operating costs and advertising revenue and report to the shareholders on many matters. Given the poor economic situation in Hong Kong, I hope the various industries will not resort to large-scale retrenchment. Companies should take care of workers and retain them as much as possible.”

As for Bob Lam (林盛斌) who hosted the last episode of Big Boys Club recently, he felt unhappy about the show’s producer Kent Gor getting retrenched, and said that many producers he knew had been affected.

Evergreen Mak ( 麥長青), who had worked with the producer of Bazaar Carnivals and had already left the station himself, said that society is ever-evolving and all things come to an end. But to receive this news during year-end would make many feel helpless, as some would not have back-up savings. Adding that many of his friends who were shop owners had to wind down their operations which were no longer sustainable, leading to many being unemployed, he hoped the phenomenon was only a passing phase. Evergreen felt that it was necessary for Hong Kongers to unite and exercise mutual understanding to survive this tough period. When asked if his move to ViuTV was a timely one, he replied that he did not have this train of thought as “There would be no Evergreen Mak without TVB.”