Accepting the Outstanding Voice Performance Championship award, Yoyo squealed, “I got it!” Thanking her voice acting coach and partners she worked with, Yoyo said, “This award is not my sole achievement, but the achievement of everyone.” She thanked Wong Cho Lam (王祖藍) for creating the show, and Liza Wang (汪明荃) for supporting all the contestants. 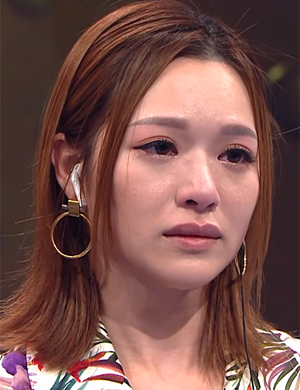 While Yoyo took home the championship, Crystal’s emotional breakdown in the finals was alarming.

Cho Lam observed that Crystal had poor control over her own emotions, “I worry that this field might not be suitable for you. You have been crying so much since this morning’s rehearsal that no one dared to interrupt you. This is only a small scene in a drama, yet your emotions are already magnified like this. How are you going to act in an [entire] drama?”

Cho Lam continued with his assessment of Crystal, “Being immersed in your role is good, but it can become a problem when artistes can’t remove themselves from their roles. I think your pressure is overpowering your ability. The pressure you put on yourself is so huge that it even gives me pressure. It makes me think that I shouldn’t have started this show.”

Previously, Crystal had revealed that the pressure of competing in Dub of War led to irregularity in her menstrual cycle. Thanking the judges for their feedback and advice, Crystal said, “I know that I put a lot of pressure on myself during this competition. In order to better immerse myself into the role, I build up real feelings and real tears since the morning’s rehearsal. My stubbornness caused my pressure to overpower my ability.” Thanking Cho Lam for pointing out the problem, Crystal promises to learn more in the future so she can better enjoy this acting journey.

Reflecting on her overall performance in Dub of War, Crystal wrote on social media. “There are definitely some flaws after re-watching my performance. My emotions weren’t accurately portrayed, and my pronunciation was not clear enough. I know that there are many areas that I need to improve on….Though it was not perfect, I tried my best.”