Above: Eric presents an award to Lisa for her fifty years of service.

An annual extravaganza, TVB’s 55th anniversary gala took place on November 19. Turning up with a show-stealing undercut hairstyle with the symbolic “55” carved, Deputy General Manager Eric Tsang (曾志偉) said his styling was already “much less fanciful than in the earlier days”.

Pleased about how the gala went, the 68-year-old shared that many friends texted him throughout the evening to comment that they were touched by the evening’s happenings, and he too said he witnessed the TVB he “wished to see when he returned”.

Priscilla Koo and Other to Make a Comeback? 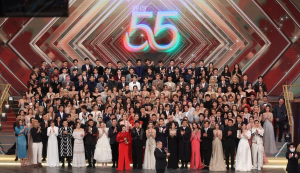 Emcee for the night, Natalis Chan (陳百祥) poked fun at Eric and said he had expected the latter to only last three or four months in his new role. Eric bantered, “So I mustn’t let him win, I’ll stay four or five months. I saw many colleagues when I got back and they were the ones who gave me the strength to keep going,”

Referring to TVB’s management shakeup, he also added that Creative Director Wong Chor-lam (王祖藍), Creative Director of Production C-Kwan (Stephen Cheng Sze Kwan 鄭詩君) and himself all started out as artistes, and are better able to understand the needs and growth journeys of artistes. Encouraging everyone not to feel dejected during his concluding talk onstage, Eric shared that many platforms have already approached him for collaborative projects.

Responding to rumors that he has secretly been extending collaboration invites to former artistes, including Priscilla Koo (顧紀筠), Eric laughingly said that he does not dare to meet up with others for tea now as the other party would think he has a motive. Jokes aside, he emphasized that he definitely hopes to see new and seasoned artistes working together.

Representing the station’s management, Eric also presented a prize to veteran actress Liza Wang (汪明荃) and commended her for being a role model. “Ah Jie (Liza) is the only one who has continuously stayed at TVB and worked for 50 years, the company wanted to give her the award at a restaurant but I felt it should be done tonight, at a formal setting; she isn’t just serving TVB, but also the citizens of Hong Kong,” he expressed, adding that this spirit is something artistes can learn from.