Twice married with four children, 69-year-old TVB General Manager Eric Tsang (曾志偉) is a veteran in entertainment circles, and often surrounded by a bevy of beauties. Recently, he was captured on video kissing a 26-year-old Malaysian model at the latter’s birthday party!

Known to be hospitable to his circle of friends both belonging to and outside of the entertainment industry, Eric made a surprise appearance at model Lebara‘s (黎峇菈) birthday party. A 1.8m-tall beauty, Lebara is the rumored goddaughter of prominent Hong Kong businessman Lawrence Yu (余錦基), and a frequent face at yacht parties and elite parties. 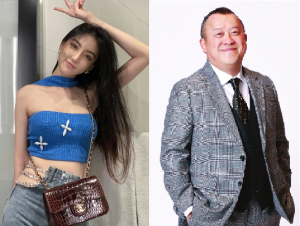 In the video taken, she was seen busy photographing her birthday cake, as friends present clapped and sang the Cantonese version of happy birthday. Clapping and singing along, Eric who was dressed casually in a white tee paced over to Lebara towards the end of the song.

Wrapping his arms around her, he joined the birthday girl in blowing out the candles on her cake, and even gave her a peck on the lips thereafter. Surprised by Eric’s display of enthusiasm, the attendees cheered, while Lebara commemorated the occasion on Instagram. Referencing the long-running TVB variety show Super Trio Series <獎門人>, she wrote “This year I got the Prize Master to blow my birthday candles and wish me ‘Happy Birthday’, my wish this year is (for) world peace without any hatred,”

With the video making its rounds on the Internet, netizens have dug up more about Lebara’s background. Fluent in Mandarin Chinese, the model filmed an eye drops and jewelry commercial with Hong Kong actor Benjamin Yuen (袁偉豪) once, and is seemingly well acquainted with the high-profile including Lawrence Yu and Lawrence Cheng (鄭丹瑞). Her social media profile is also full of pictures of her out at sea, dressed in bikinis which show off her figure.